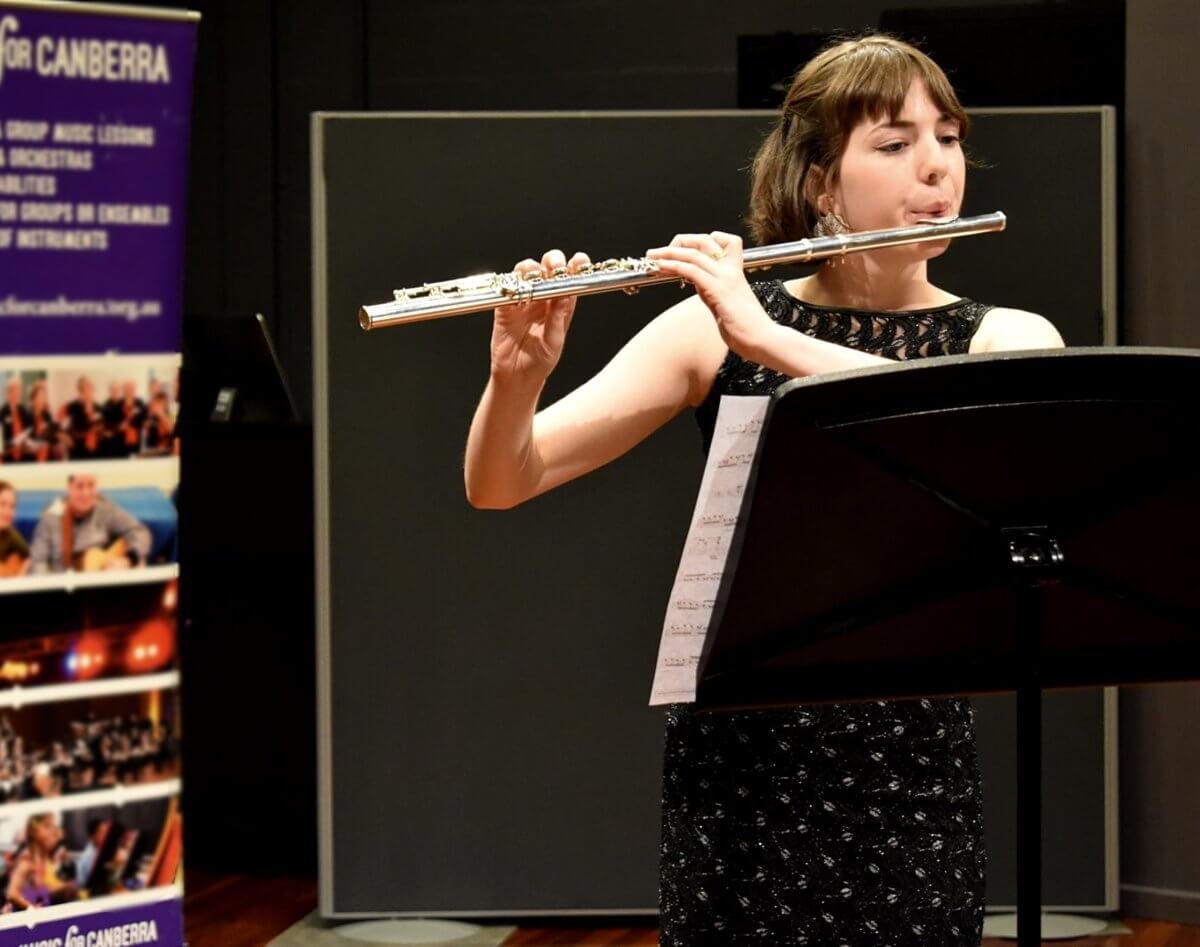 ANU student and 2018 winner of Canberra Youth Orchestra’s Concerto Competition Serena Ford will be a highlight performance at the upcoming CYO concert on 30 June. The CYO, which celebrated its 50th anniversary in 2017, performs four concerts a year at Llewellyn Hall and is the premier youth symphony orchestra in the ACT and wider region. I caught up with Serena before the big performance to ask about her musical journey:

‘I first started playing the flute in grade 5 with the Instrumental Music Program like many young Canberrans. I started because I really enjoyed, and still do, playing with other people. There’s a kind of ritual to playing music together and it doesn’t matter what music style you are exploring, it’s just such a communal, human experience, so that’s what first got me into music.’

‘I do feel this is a milestone for me. In the past I just played music because I enjoyed it, so I never did exams or any of the prestigious stuff to formally recognise the level I was at. This concert has become a symbol of all the work from my past years of practise, so that’s a really good feeling. The piece I’m playing is called Flute de Pan and it’s based off the Greek mythology creature, Pan, who I’m sure many of our classical studies students would be interested in. It’s a really interesting story since Pan is actually often credited as the inventor of the flute since he was chasing a nymph who transformed herself into reeds, which he then snapped and began to play as a flute.’

Alongside her musical achievements Serena is studying a Bachelor of Asia-Pacific studies here at ANU. I asked Serena how she manages to balance studying with being a committed flautist.

‘It has been quite a busy few years at university! I have to do a lot of intense planning at the start of semester to make sure I meet all my musical aims and academic aims in time and at a good level, and I practise every day. Although music is also an intellectual process in many ways, it helps me to practise a bit of flute in between massive study sessions so that I’m stimulating my brain with new tasks and keeping myself energised.’

Serena’s career at ANU started in year 12 at the Open School of Music, which she said exposed her to a new level of music learning. ‘In a more abstract way, I’ve found that through my other non-music specific studies at the ANU, the emphasis has always been on thinking about concepts in novel ways. Interestingly, this has really helped with the way I approach new pieces, since I realise there is a depth of thought and complex processes that go into writing a piece of music from the composers.’

Despite the concert’s prestige, Serena said she isn’t feeling too apprehensive about performing yet:

‘The funny thing is that it doesn’t really hit me that I’m going to be in-front of people performing until two seconds before I actually get on stage. So for the moment I feel pretty relaxed, but I know what’s coming! Sometimes I get so into the zone from performing that I don’t actually have solid memories of playing. I don’t remember any details between the moment of getting on stage and getting off. So I think I prefer to let the nerves come to me when they do and just focus on my technique and sound for the moment.’

I asked Serena about why students should get involved in Canberra’s orchestral scene and how other budding musicians can get motivated.

‘I think the main aversion most young Canberrans have toward the orchestral scene comes from the belief that it’s only traditional, classical music. We actually dabble in a whole bunch of different stuff, with the CYO playing alongside the jazz trumpeter, James Morrison last year, an a cappella group, The Idea of North, and plans to play a student study favourite later this year – film soundtrack music.’

‘Orchestral music can explore all sorts of human experiences and emotions. When you’re watching musicians onstage, they are engaging in a medium of human communication, since they are interpreting the collection of sounds and feelings and presenting it to the audience, who also have the chance to experience and interpret it in a different way again. It’s really magic and I highly recommend listening to as much live music as possible, since each new live performance is an expression of a mood and orchestral music covers the whole spectrum of emotion and styles.’

‘Following passions you have outside of study life really enriches your everyday life. When I’m stressed out about my studies, I practise my flute and that makes me feel better. When I’m stressed out about my flute, I study! The important thing is to pursue things that will give you satisfaction and which allow you space from only doing one task your whole day or week. It’s not about distraction or procrastinating, it’s just a really nice way to fulfil yourself and spend time cultivating the things that make you feel most content. I guess my last bit of advice is that getting into the zone and focusing deeply on whatever you’re doing, whether it’s practising the piano for fun, cooking in between study sessions or studying itself, feels dang good! And it’s good for you, too.’

Musical director of the CYO and ANU convener Leonard Weiss said that CYO is delighted to feature one of its own in the upcoming performance.

‘For me, it’s such a pleasure to conduct an orchestra that inherently brings a lot of energy and enthusiasm to each rehearsal and especially the performance,’ Leonard told me. ‘For the most part, every musician is approaching this repertoire for the first time, so there is a genuine hunger for and appreciation of each new piece that we perform, which I think is evident to our audiences.’