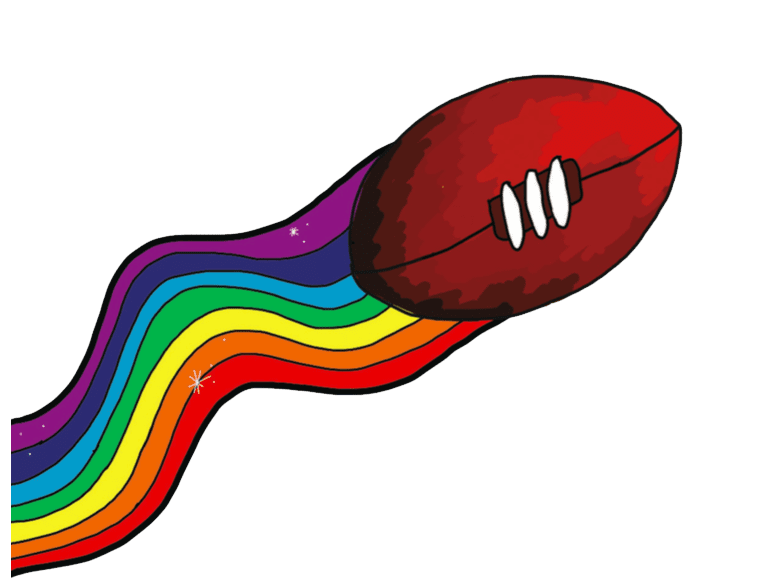 Football Has a Homophobia Problem and We Must Find a Solution

‘I’ve had players over the years who were single and read books and so others said they must be gay… I think being openly gay would be something very difficult to live with in football…. You can get drunk and beat up your wife and that’s quite acceptable, but if someone were to say ‘I’m gay’, it’s considered awful. It’s ridiculous.’

The words of former Crystal Palace manager Alan Smith in 2005.

Football is Australia’s most popular sport and as its popularity grows so does the exposure of Australian fans to its distinctive culture. Unlike other major Australian sports, football supporters globally act not as spectators but as contributors to a raucous melodic atmosphere. Utilising chants, flares, flags and percussion uniquely (if you think AFL banners are impressive, look up tifo) to encourage their teams and intimidate opponents. Taking inspiration from their European, South American, Asian and African cousins, the rise of clubs such as Western Sydney Wanderers and their supporter base have redefined the Australian sporting landscape. No longer do football fans have to travel across the world to witness the unique atmosphere of a football game, it is right at our doorstep.

Footballing culture, however, is plagued by negative and destructive prejudicial undertones. When this is combined with Australia’s deeply rooted issue of discrimination, a disturbing picture of marginalisation and abuse is painted; particularly in relation to the LGBTIQ community.

In Australian sport generally, the number of openly gay athletes playing at the elite level is shamefully low. There are no openly gay players in any of the major men’s sporting competitions. Though there are multiple openly gay female athletes participating domestically, Canberra United forward Michelle Hayman was the only openly gay athlete to represent Australia at the Rio Olympics. Recent Out in the Fields studies highlight the root of the problem. Following a survey of more than 10,000 Australians and New Zealanders, the report found, ‘few positive signs in [either] country that LGB[TIQ] people are welcome and safe playing team sports.’ The report also noted Australia’s aggressive physical education system, severe lack of gender diversity within the major sporting codes and continuing acceptance of homophobia slurs and behaviour, as contributing factors to the toxic homophobic culture.

In football, traditions of tacit acceptance and bullying exacerbate homophobia . In England for instance, there have only been two openly gay men playing football professionally to date. Of these, the first, Justin Fashanu, killed himself eight years after coming out while the other, Robbie Rogers, retired at the age of 25. In both cases, media coverage was intense. Most concerning, convicted rapists and domestic abusers not only outnumber the sum of ‘out’ footballers in the game, but are more openly accepted by fans, pundits and the media alike. How can it be that footballers with a certain sexual orientation have a harder time being accepted into the footballing ecosystem than criminals?

Starting at the very heart of the game, homophobia is inextricably linked to on-and-off field ‘banter’ between players and coaches. Rogers, speaking about his experiences in 2013, noted that dressing room conversations would inevitably contain homophobic slurs. He said; ‘I would get this awful feeling in my stomach… I would turn my head and try to chat about other things… It’s that pack mentality – they’re trying to get a laugh, they’re trying to be the top guy… But it’s brutal…. It’s like high school again – on steroids.

Many excuse these players’ behaviour as the manifestation of the macho culture and one-upmanship inherent in all sporting codes. Yet, one cannot help but feel that if such repartee were based on race rather than sexuality, the comments would be considered entirely unacceptable, even within the confines of callous dressing room interactions. While racism and homophobia are concerned with discrimination based on an individual’s characteristics, the fact that it is often far more difficult to obscure ethnicity than sexuality means players and coaching staff continue to express homophobia in the form of jokes and ‘banter’ with the tacit agreement of those around them.

Such tendencies continue when analysing fan behaviour. For decades in the UK, non-white footballers were subject to racist abuse from both home and away supporters, which was largely ignored. As recently as the 1980s, racist chants have been commonplace. Chants such as, ‘Everton are white’, Millwall’s ‘n*****s burn better than petrol’ (in reference to the 1981 Deptford fire in which 13 black youths were burnt to death) and the Tottenham targeted ‘the gas man’s got them’ (referring to Tottenham’s sizeable Jewish supporter-base) were routine. Individual non-white players were targeted through monkey gestures, personalised songs and so on. To counter this, the Commission for Racial Equality (CSE), the Football Supporters Association (FSA) and the Professional Footballers’ Association (PFA) joined forces to launch the Let’s Kick Racism Out of Football campaign in 1993. The campaign, alongside the 1991 Football (Offences) Act, helped discourage racist behaviour (both individually and in concert) and encouraged the reporting of offences. Hence, through the actions of the FA, CSE, FSA, PFA, stewards, police and advocacy groups such as Kick It Out, the volume of racist abuse in English football has decreased markedly over the last 15 to 25 years, with racist episodes being far more likely to be condemned and reported. For example, during the 2014/15 season, the FA revealed that the number of reported incidents of racism was 149 (and around 800 including statistics down to a grassroots level). This figure was greater than the previous season but, rather than indicating a rise in racist behaviour, was, according to FA’s head of judicial services Mark Ives, attributable to ‘people feeling more confident about reporting abuse.’ These statistics are encouraging and support the hypothesis that fan behaviour can be altered through the positive action of authorities.

However, when these statistics are analysed for incidents of homophobic abuse the release states that ‘reports of discrimination based on sexual orientation… increased, from five to 15’ over the 2013/14 and 2014/15 seasons.

During the 2012/13 season alone, Brighton and Hove Albion supporters publicly reported incidents of homophobic abuse by at least 72 per cent of opposition fans as well as multiple players. As Brighton is home to the UK’s most popular pride march and has a historically strong gay community, there is a suggestion that, unlike racism, fans are highly unlikely to report homophobic incidents specifically.

The abuse is not isolated to opposition fans, with both players and officials being the victims of some of the most vitriolic instances of castigation. In 2016, Spain’s first openly gay referee, Jesús Tomillero, quit the game following a barrage of abuse from not only fans but also members of coaching staff. ‘That’s that f****t who came out on the telly!’ was one of the most egregious examples of abuse, with Tomillero reporting that the majority of the crowd laughed in response. In the Brighton report, Albion supporters recounted the commonality of chants such as, ‘town full of f****ts’, ‘does your boyfriend know you’re here?’, ‘go home you gayers’ and ‘the referee’s a gay boy’. Referee abuse is not unusual in any sport, but the fact that such abuse is inextricably linked with homophobia is disturbing.

In Australia, the situation is no better and what is particularly worrying is that the growth in fan participation in football will lead to a rise in such behaviour. Just this year, a group of Western Sydney Wanderers supporters unfurled a homophobic banner targeting Sydney FC manager Graham Arnold during the Sydney Derby.

So what is being done to combat this problem? Many responses have been individual-oriented, with admissions that, while authorities do have some responsibility to change player and fan behaviour, it is up to the individuals themselves to make the change. Such an approach didn’t work with racist abuse and it won’t for homophobic abuse either.

In the case of racism, in nations such as England where authorities have taken affirmative action against racist behaviour via reports and tangible legislative changes, the results have been marked drops in the amount of racist incidents in football grounds. In places such as Russia, where both racist and homophobic behaviour are not only ignored but also overtly encouraged, there has been absolutely no change in fan or player behaviour. The same could be said in Spain or Italy.

Such success in combatting racism for nations who have proactively attempted to stamp it out should surely be emulated in the case of homophobic abuse. However, the Football Association (England’s chief footballing body) has not denounced homophobia nor supported LGBTIQ rights through reports or participation with advocacy groups. Apart from token gestures such as the distribution of rainbow laces to clubs and a 2013 ‘toolkit’ provided to Football League clubs (of which only 29 of 92 publicly supported), there’s been little to no action from any of the major English governing bodies.

Further, many of the token gestures have been ill-conceived. When Premier League chief executive Richard Scudamore stated in 2015 that it would be ‘very strange’ if there were no gay footballers in the top flight and that ‘the environment would be entirely suitable for [players] to come out,’ he showed a clear lack of understanding. Earlier this year, Premier League chief executive Greg Clarke even suggested that gay players should ‘synchronise’ ‘coming out’ in order to increase the impact of their decisions, putting the onus of solving the problem on the LGBTIQ community itself.

How can the environment be suitable for players to come out when homophobic chanting blights over half of Brighton home games? Or when players such as Robbie Rogers feel they have to retire in order to express their sexuality? Scudamore said that he ‘wouldn’t like to say [the environment’s] perfect, but certainly, it’s better than ten years ago.’ It was just over seventeen years ago that Justin Fashanu took his own life and, while Rogers’ retirement from the game is certainly an improvement upon that tragic incident, it is not acceptable to surmise that the game is now anywhere near tolerant or inclusive. And finally, what, you may ask, has been done about the Brighton and Hove Albion report? The report was released in April 2013, and none of the major governing bodies in England have responded.

The football governing bodies in Australia need to be more proactive in dealing with the homophobia that pervades and undermines the sport. They must learn from the naive and disinterested responses of other organisations attempting to counteract the issue. This would leave the game in better stead by including and embracing thousands of people currently marginalised from the game, greatly improving the experience of all players, coaches and fans. Further, it would also enable the game to take a strong stance against homophobia in a way unmatched by any of the domestic sporting codes in Australia or the vast majority overseas. Unfortunately, this will take more than rainbow laces and fines. We need cultural change and strong advocacy in favour of material alterations in behaviour, something that has not been particularly evident in responses thus far.