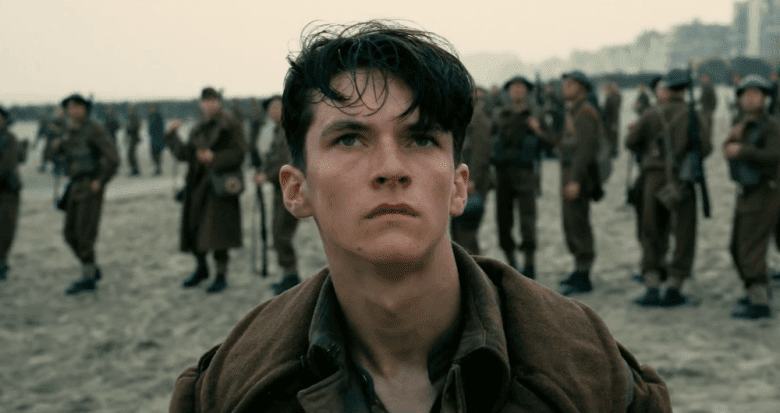 1.9.2017 by Dominic Harvey-Taylor
This review was powered by Dendy Cinema, Canberra.

Dunkirk is Christopher Nolan’s first war movie. It tells the story of one of the Allied Forces’ greatest defeats during World War II – the evacuation of the British Expeditionary Force from France. The BEF was forced by the Germans to retreat to the port of Dunkirk, completely isolated from the main French Army and exposed to enemy bombers above. Due to the fear that Germany was preparing to invade Britain next, the British government was reluctant to supply many navy ships to rescue the stranded men on the beach. Instead, the call went out to civilian boats, requisitioned by the Navy, to sail across the Channel and bring almost 400 000 troops home.

The film cuts between three different perspectives. The first is that of the soldiers on the beach who are in perpetual danger of being wiped out by enemy bombers. The second is the perspective of a civilian boat, a motor yacht, which sets out across the short stretch of water between Britain and France to rescue soldiers. Thirdly, from the air, the film portrays the perspective of an RAF pilot engaging with the German bombers above the ships.

As is typical in Nolan films, the passing of time and continuity are both malleable constructs that can be manipulated to reflect the narrative. The events on the beach span over a week, while the events in the sea take place in a single day and the pilot’s perspective lasts only an hour. It sounds confusing, but the effect is very well put together and gives a real sense of the different levels of engagement in the battle in the air, on land and at sea.

Dunkirk is relatively light when it comes to dialogue and character development. The characters act in fairly predictable ways and unfortunately the protagonists look very similar when they’re all wearing the same uniform. But, these flaws don’t really take much away from the movie as it’s meant to be more of an atmospheric film rather than character driven.

The film is constantly propelled forward by Hans Zimmer’s amazing score, which incorporates the sound of the relentless ticking of Nolan’s own pocket watch to create a mounting feeling of suspense. The soundscape of this film combined with the enormous set pieces on the screen is the defining characteristic of the movie, which deserves to be seen in a cinema with the best possible surround sound.

It is an extremely intense movie to watch. There is this constant feeling of dread in this film where every second is a struggle for survival and nowhere is safe.