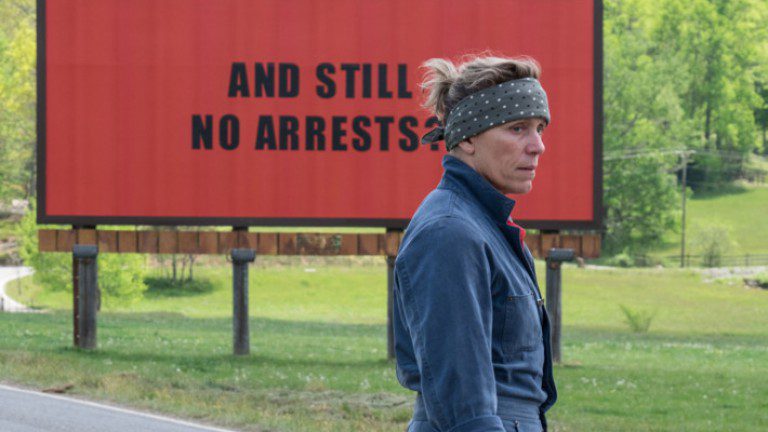 Martin McDonagh’s film Three Billboards Outside Ebbing, Missouri, has received 189 nominations and 87 wins at award shows, and it deserves every single one. McDonagh shows us a story that from the surface evokes anger and revenge, but unravels to one of justice and community. Mildred Hayes (played by Frances McDormand) rents out 3 billboards probing the police department’s inability to find her daughter’s murderer. The consequences of her actions unfold a story with multiple subplots, and an fast-paced plot with twists and turns at every corner. McDonagh fills the film with commentary on everything from domestic abuse, to police brutality, racism and homophobia. Yet he still manages to keep the audience on the hook by intertwining his unpredictable plot line with recurrent dark comedy.

The film’s portrayal of the undercurrent of racial prejudice in the local police department has been met with criticism, due to the limited portrayal of people of colour in the film, as well as the redemption arc of the main racist cop in question. While this does reduce from the overall experience of the film, and is probably what led to McDonagh’s snub in the best director category, the film manages to broaden its focus to a range of issues to the extent that it minimises its missteps in that particular subject matter.

Ultimately, the film’s execution is seamless, the characters feel real, their dialogue perfectly parallel to their emotions- credit of which goes to the actors and writers. Frances McDormand is solemn and effecting in the lead role, but excellent supporting performances by Sam Rockwell and Woody Harrelson buoy the film to the heights of critical acclaim.

Three Billboards is the kind of movie you will think about after leaving the cinema, because after posing so many questions McDonagh answers very few. It manages to shock, surprise and make the audience laugh even in the most dire situations. Not one to miss.