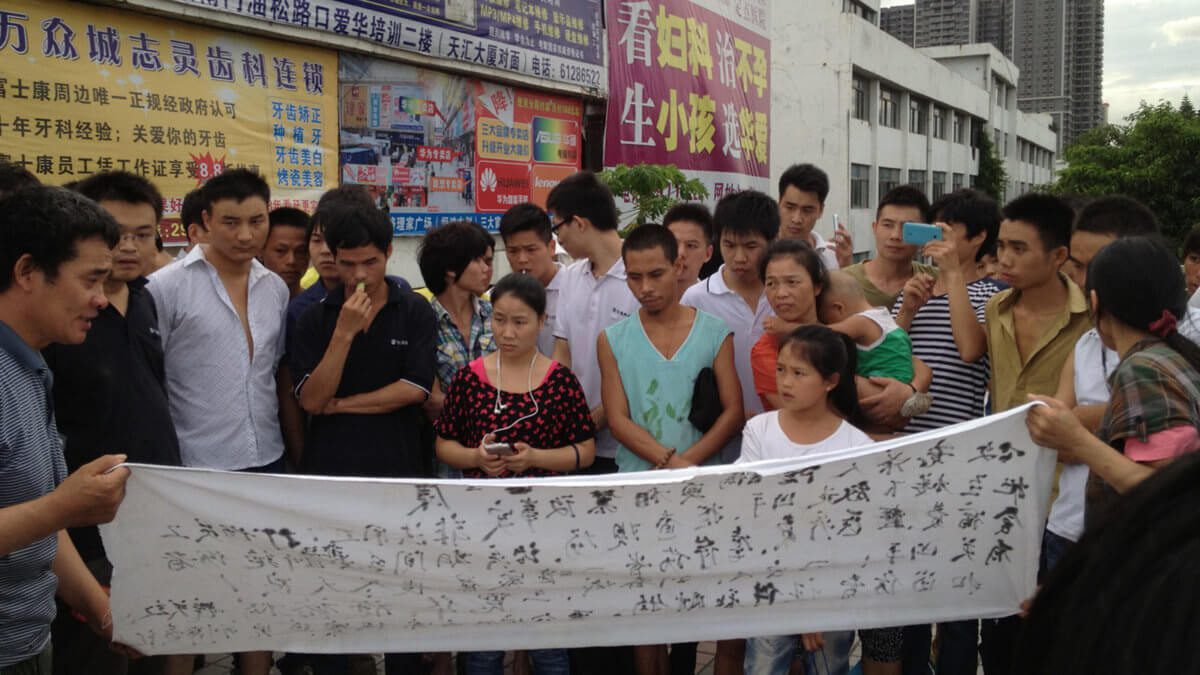 Complicit is a harrowing and deeply moving documentary that shines a light on the ethical issues that plague the electronic manufacturing industry in China. It exposes audiences to the chilling reality behind the production of the products that are part and parcel of our daily lives. Directors Heather White and Lynn Zhang force audiences to face the harsh truth that comes with every phone, tablet or computer we own. The film teaches us that with every purchase comes not just a financial cost, but a human cost; the cost of family trauma and devastation and, in many cases, the cost of life itself.

The film traces the journey of millions of young people who leave their hometowns in the countryside to arrive at the thriving cities of China. There they undertake opportunities that will alleviate the financial stresses that rural families experience. Once in the city, these workers become consumed by the booming corporate manufacturing industry that is driving China’s economy. These factories are crucial in producing the electronics that supply about 90 per cent of the world’s electronics, including cameras, computers and smartphones.

Most factory employees endure unbearably long hours, with some workers recounting how they were forced to work up to three to four days straight. This is all done in airtight rooms with no natural light, and with exposure to toxic chemicals. Complicit contains interviews with a myriad of young workers, predominantly females in their early 20s, who detail the dire conditions they endure. They all sought a common goal of earning money to support their families and make a better life for themselves, not ever realising the devastating impact this was having on their health.

While most developed countries are signatories to the 1971 Benzene Convention and have subsequently stopped using cheap solvents like Benzene, these are still commonplace in many Chinese factories. This is neglectfully jeopardising workers’ health for the sake of saving a few dollars in expenses. One such solvent is n-Hexane which – although widely prohibited – is the choice of many factories because it evaporates faster when wiping new iPhone screens. Prolonged exposure to this chemical can lead to devastating afflictions including nerve damage, paralysis, cancer and leukaemia. The film shows this via the haunting scenes of female workers struggling to walk as their legs buckle beneath them, a result of their exposure to the n-Hexane chemical.

The film provides a disturbing exploration of occupational disease from a variety of perspectives. Audiences hear the feelings of shame, disappointment and suffering that plague the young women affected. One worker fought back their tears to explain: ‘I didn’t dare tell my parents (about her irreparable nerve damage) …I came out here to ease their burden, but the truth is, I have become their burden.’ This poignant moment of raw emotion really struck home just how tragic these stories truly are. These workers are often shouldering the hopes and expectations of their entire families, only to have these crushed by the disgraceful neglect of their employers.

The film also explores how this issue touches families, who must navigate immense legal obstacles in the plight to attain compensation for their deceased children. It recounts the struggles of activists and NGOs who must fight a corrupt system and a government that actively tries to tear them down. In telling these stories, the film relies heavily on footage attained from undercover workers. This makes the film equally chilling and compelling as audiences cannot escape the nauseating reality of these working conditions.

Neglect, corruption and human tragedy, these are the unsettling thematic threads that tie this masterful documentary together. The directors’ ability to capture the tormenting stories of tragedy will make an indelible impression on the consciences of audiences and consumers across the world. There is no happy ending here. Aside from a few vague statements from major brands – such as Apple and Samsung – that utilise factories in China, the issue of workplace safety remains. In this way, Complicit is a call for action. It challenges audiences to educate themselves about the story behind the devices that have become an inescapable part of our daily lives.

Painful, compelling and deeply moving to watch, Complicit should be required viewing for any 21st century consumer.