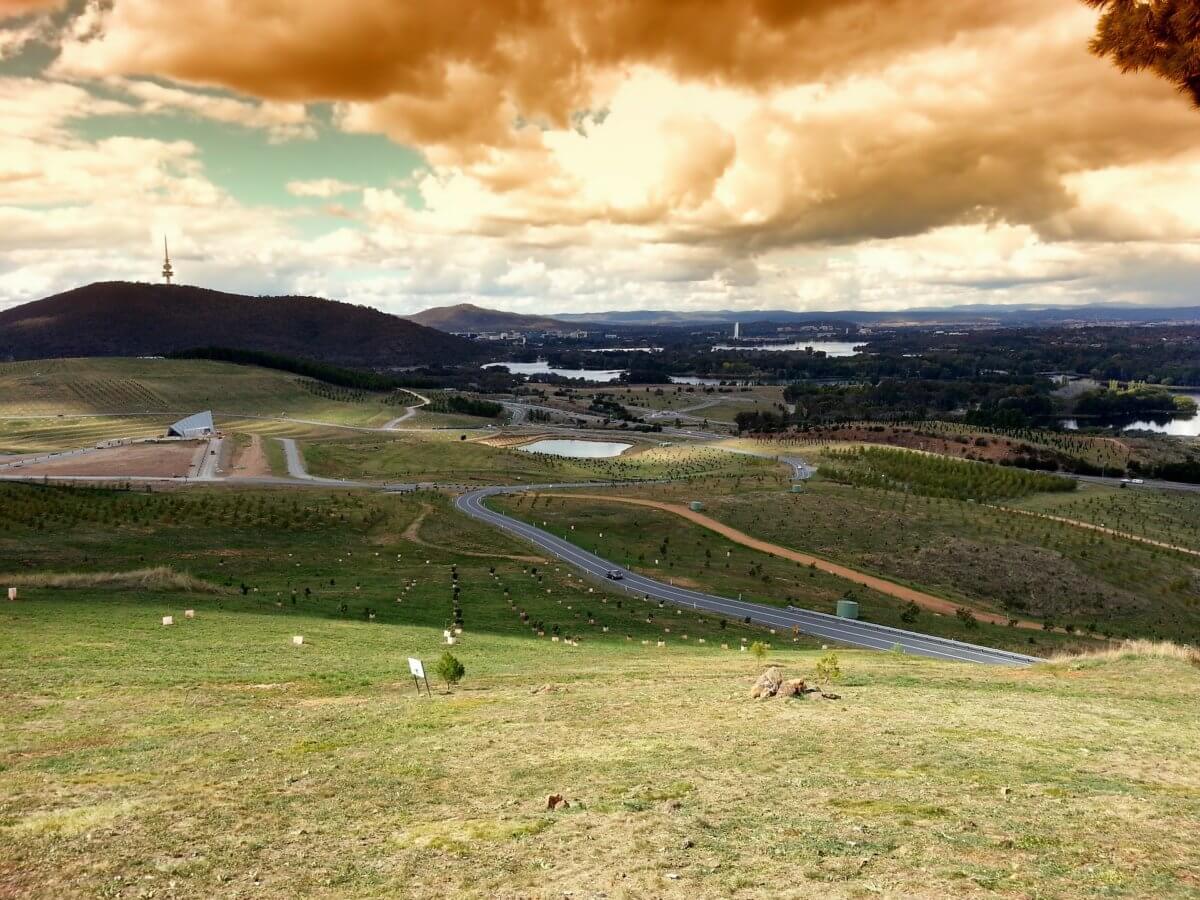 An old friend of mine, working the breakfast shift at one of Canberra’s flashier hotels, sent me a message one morning a couple of weeks ago saying she had possibly found a job for me. There was a man at breakfast who had a day to kill in the capital, and he was looking for someone to show him around. Would I be interested? He was prepared to pay cash.

Not quite sure what to expect, I headed off down Canberra Avenue to meet the man who wanted to see the city. And before long we had set off in his 1970s Torana, listening to Bach cantatas, with no idea what I had got myself into.

How do you give someone an overview of a city in three hours? What is the most important feature? What can they not leave without seeing? At what point have they done Canberra?

This brief will always be an uphill battle in our much maligned national capital, the city which allegedly lacks a soul. Canberra is often written off as a sparse suggestion of civilisation where the transient workers of politics huddle around the outlines of city centres, and where Year Six students from around the country are trooped around institutions and monuments of national significance.

Canberra bashing is a national pastime. Because the word ‘Canberra’ is inextricably associated with ‘government’, comedians, media personalities, newspaper columnists, and anyone with access to a television or radio transmitter can dine out on negative impressions of the capital. And what more ammunition do you need when Melbourne, that flat, bluestone city built on the promise of gold and sustained now on the illusion of culture, is the fastest growing city in Australia and is repeatedly awarded the status of ‘most liveable city’?

I have listened with bemused interest to the opinions of recent arrivals to Canberra, as they make sweeping statements and insidious generalisations based on their experience within 10 kilometres of postcode 2601. It is always a list of things that Canberra doesn’t have, misses out on, fails to provide or apparently skips over. ‘But in Melbourne,’ some critic will invariably start, hoping to convert me to the wonders of the Victorian capital less than 650 kilometres to the south. Why haven’t I moved already?

The Economist Intelligence Unit found earlier this month that Melbourne, once again, was the world’s most liveable city. With a score of 97.5, it was placed just ahead of Vienna and Vancouver on the Economist’s index.

The ranking accounts for stability, healthcare, culture and environment, and infrastructure. But it doesn’t account for that intangible quality that Canberra has – of quiet, space and yet of compactness. This is no perfect city – no city can be when it is impossible to get a bus home after 9.30pm on a week night – but, considering its age and inherent promise, it comes pretty close. All of Canberra’s true believers – whether they have been converted later in life, or were, like me, born into the fold – subscribe to that utopian ideal which underpins the design and intention of the city.

I directed the one-man tour up to the summit of Mt Ainslie, the best vantage point to see the Griffin Plan. We stood looking down the axis that joins the War Memorial to Old and New Parliament House along Anzac Parade and across the Lake. This concept was nearly just the stuff of legend. The Griffins – Marion and Walter – only found out at the eleventh hour about the international competition to design a new Australian capital, their plans were rushed and their entry was the last to arrive.

But we can see now that it was the natural choice. A design in the modernist spirit, which believed that architecture could influence people’s lives for the better, that the space we created for ourselves also shaped us.

Peter was enamoured. The last time he was in Canberra, Malcolm Fraser was still in the Lodge. How the place has grown since then, he told me as we surveyed the vista.

On our drive around Canberra, I continued to point out different buildings, spots and the scenes of various stories: the funeral home across the road from the Russian Embassy where an ASIO agent was posted at the height of the Cold War; the domestic architecture in Griffith, the early model of how Canberra was conceived as a Garden City; the embassies and hotels; the faint suggestions of the city’s history and development. It was an attempt to weave a semblance of story where Canberra is portrayed to have none.

It takes time to get to know a city, to walk the streets and feel boredom and excitement at different moments. A three-hour driving tour with 25 minutes of prior preparation isn’t enough to do that. Peter and I didn’t do Canberra. But it was enough to show that there is life beyond politics and austere national buildings here. It was enough to show a city where income and well-being is high and services are good, where people are afforded the opportunity to lead intriguing and fulfilling lives.

So maybe instead of staving off boredom in laneway bars, caught in a grid of expansive flat suburban sprawl, Canberra is quiet because that’s what the locals are off doing instead.