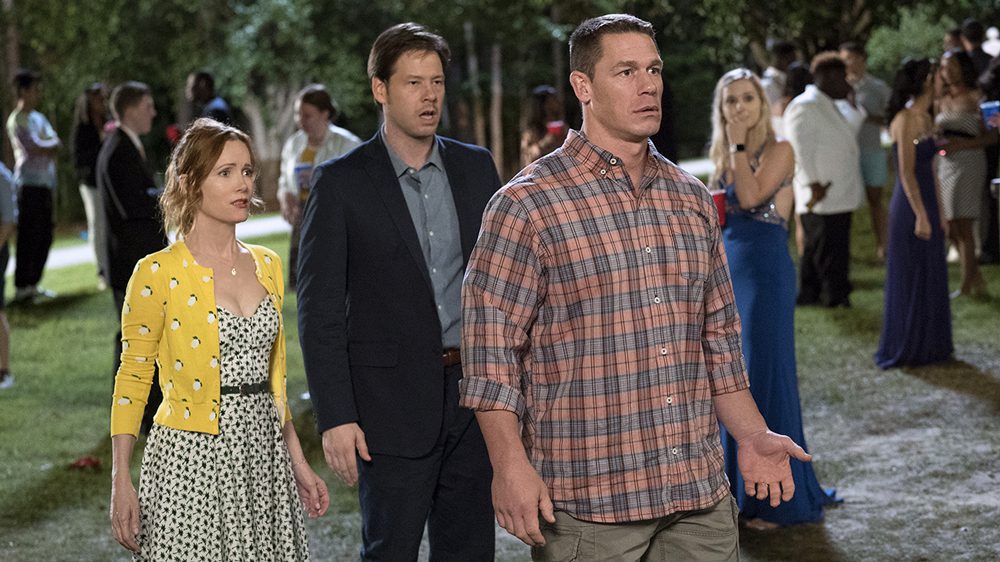 Blockers: a funny, smart sex comedy for the modern age

The only way to start this review is with the preface that we should not judge a book by its cover nor a movie by its title/promotional materials.

Blockers is the latest film from producing team Seth Rogen and Evan Goldberg, and is the debut directorial effort by 30 Rock and Pitch Perfect writer Kay Cannon. The story revolves around three high school best friends, Julie, Kayla and Sam, who make a ‘sex pact’ to lose their virginity at their senior prom. Three of their parents, Julie’s mum Lisa (Leslie Mann), Kayla’s dad Mitchell (John Cena), and Sam’s dad Hunter (Ike Barinholtz), soon catch wind of the plan and set out to ‘cock block’ their daughters. The promotional trailers, movie title and general premise all led me to expect a stupid, but hopefully somewhat funny, teen sex movie. I was pleasantly surprised to find this film was so much more.

The move is littered with smartly written jokes, and even the bits that should be cringe-worthy are somehow seriously funny. I could’ve done without the vomiting sequence, but other than that the jokes were surprisingly sharp and thoughtful, and rarely relied on cheap gags.

One of main reasons this movie has all the makings of a classic modern-day sex comedy is the diversity strewn throughout. We learn early on that one of the girls, Sam, has agreed to sleep with her male prom date as a part of the pact despite the fact that she is crushing on another woman. The exploration of her sexuality throughout the one night span of the movie is surprisingly nuanced, especially when it comes to the development it espouses from her estranged father, Hunter.

Kayla on the other hand comes from a multi-racial household where her father Mitchell takes on the overbearing and emotional care-giver role, while her mother Marcie (Sarayu Blue) is the voice of reason and disciplinarian. While this gender-role swap is exploited for some laughs (especially by John Cena’s character), it still feels meaningful. This is especially true when Marcie gives an impassioned speech about why they should respect their daughter’s abilities to make her own decision like they would for a son who was considering having sex for the first time.

Finally, Julie was raised by single mother, Lisa, and the film explores the anxiety Lisa feels about Julie leaving for college when she has been at the centre of her life for 18 years. Lisa takes on the controlling mother stereotype, but the context given to her motives means the audience still empathises with her.

It’s hard to believe, but Blockers is probably the most meaningful exploration of the ‘teen’s losing their virginity’ trope I’ve ever seen in a film. The central teenage trio, Julie, Kayla and Sam, are well developed, funny and intelligent women, which is all too rare in movies of this genre. Not all of the parents in the movie are on the cock-blocking mission, and those who are have legitimate and developed reasons for their quest, whether it be regret over a teenage pregnancy, or an absentee parent trying to reconnect. They all ultimately come to the right conclusion, (mild spoiler alert) that their daughters can make decisions for themselves, and should be allowed autonomy without interference.

For a fresh take on the teen sex comedy, Blockers is definitely worth a visit to the cinemas. It’s original, genuinely funny and progressive and modern without making a big deal about it.