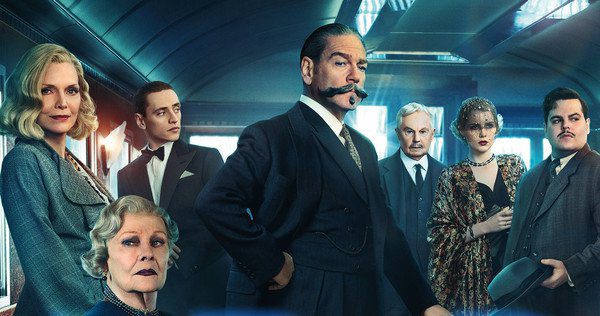 Kenneth Branagh not only directs but stars in, the latest retelling of the Agatha Christie classic Murder on the Orient Express. In this tale, his character, famed detective Hercules Poirot, is aboard the Orient Express when a fellow passenger is murdered. After the train is subsequently derailed Poirot is left to investigate and the remaining passengers become suspects. While Branagh’s take on Poirot is not particularly different from previous adaptations, the humour and character he brings to the role is a welcome addition to this otherwise morose tale.

The star-studded cast also includes Dame Judi Dench, Michelle Pfeiffer, Daisy Ridley, Penelope Cruz, Leslie Odom Jr. and many more. They portray the various characters aboard the train with aplomb, but the sheer size of this ensemble, with 17 key characters, somewhat undermines these performances. In particular, the intense focus on Poirot himself leaves the suspects’ individual motives undeveloped. It’s hard to say why this is the case – perhaps it stems from Branagh’s choice to place his own character front and centre – but greater character development would have enhanced the mystery at the heart of the film.

Branagh’s adaptation is mostly faithful to the source material, with minor diversions reflecting the influence of his own idiosyncratic style. He adds to Poirot’s character, for example, an obscene face-covering moustache paired with a convincing, but somewhat ridiculous, Belgian accent. Additionally, Branagh engages a number of unusual camera angles to capture the large ensemble cast in the train’s confined setting, including bird’s eye views and perspectives from outside the train.

This remake succeeds not because of any ground-breaking originality or character development, but on the back of the stellar performances of its A-list cast, its stunning visuals and the production design. Despite having read the novel and already known the killer’s identity, I still found myself on the edge of my seat as Poirot revealed them in his signatory address to the suspects. For me, that is the mark of success for any murder-mystery film.

While some will question the need for a new slate of Agatha Christie film adaptations (the closing scene of the film alludes to a Murder on the Nile sequel), Murder on the Orient Express is engaging in its own right. In my opinion, that alone is enough to warrant a trip to the cinema.

Murder on the Orient Express is in cinemas now.