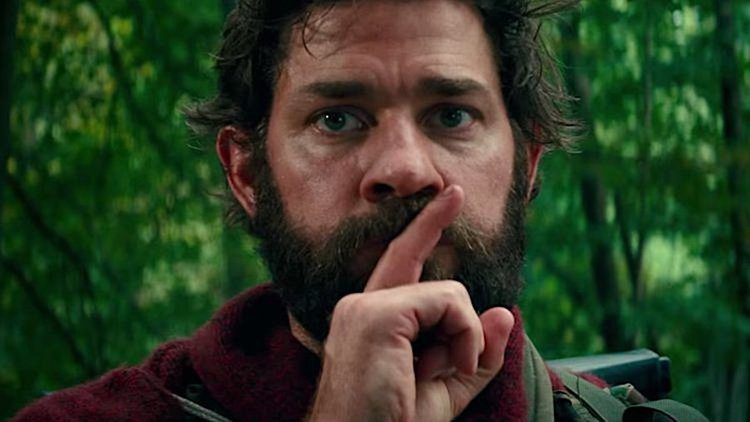 ‘A Quiet Place’, led by director and star John Krasinski of ‘The Office’ fame, raises an interesting question: what would life be like without sound? Starring alongside Emily Blunt, Krasinski presents a world completely devoid of noise, lest you be hunted by the creatures attracted to it. The premise is a staple of the horror genre, but never has it been explored in such a way. It creates an uneasy excitement for the viewer, particularly when reaching for the popcorn. It’s thoroughly engaging, with foreshadowing of potential sound-filled moments leaving you silently screaming in your seat. The film does struggle a little in the cinematography department; lighting doesn’t always match up well and various shots are awkward to look at, but these moments are usually overpowered by the sheer worry one feels as the characters must contain themselves long enough to escape.

However, despite all the tension, the movie’s consistent breaking of its own universal ‘rules’ results in the viewer being taken out of the tension and questioning the characters more than sympathising with them. Throughout the film, it is established that the creatures are attracted to the loudest form of sound or, in the case of a river stream, not attracted to consistently loud sounds. So, this beckons the question: why do the characters risk death everyday by living in a farm house when they could simply live near a loud source of sound? This point is even brought up further along in the movie, when fireworks are used to distract the monsters from a character being hunted. The characters are aware of the potential of noise as a deterrent rather than simply avoiding noise, so why not find ways to make everyday life possible with the incorporation of noise? Move to a river, establish a system around the inclusion of noise. Even the idea of sound-proofing against the creatures is addressed; the two main characters have a child and must keep both him and the mother in a room in a basement that is purely to contain noise within it. Why not do that all over the house? Why contain it to one room? It may seem nit-picky, but it completely ruins any perception of this universe as life-like and drags an otherwise fantastic premise through the unrealistic mud.

It isn’t all bad with ‘A Quiet Place’ – it does work fantastically as a horror movie. However, many of these logistical issues plague the viewer after a couple of watches, or even during the tense scenes. It is understandable that horror movie characters aren’t always the smartest bunch, but when it isn’t addressed that their post-apocalyptic lives could be so much easier if they would just consider their options regarding working with noise, rather than against it, it results in a movie that could have been so much more, but ultimately becomes an interesting premise squandered.