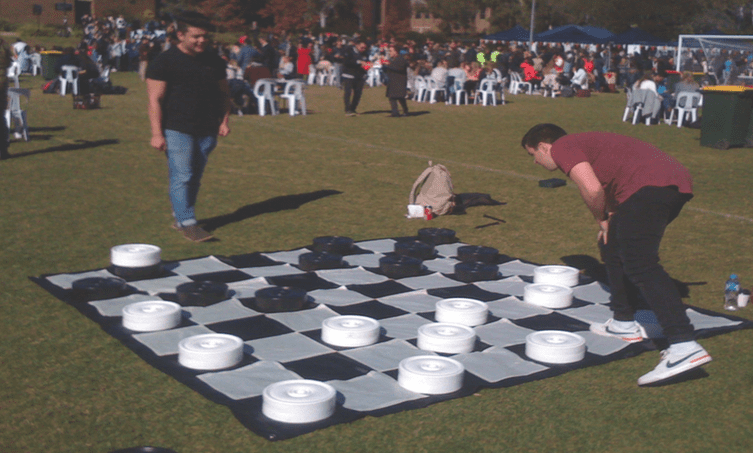 Avocado was the first to go, as organisers were surprised by the demand for free food at the ANU’s 71st birthday picnic at Fellows’ Oval on Wednesday, 2 August.

The Foundation Day celebrations ran over lunch, with both staff and students turning out to enjoy the food and sunshine. Giant board games, a bouncing castle and a scavenger hunt completed the festivities.

The vice-chancellor, Brian Schmidt, said that 71 years after its foundation, the university has ‘a lot to celebrate’.

He used the event to reflect on the past year and announce new initiatives at the University.

Schmidt spoke about the ‘grand challenges’ the University faces. ‘It is a year that has seen, I think, the University really think about what its future is going to be,’ he said.

He focused on the University’s effort to better engage with the public and the government, ‘getting other people outside the University excited in what we’re doing, [and] getting government thinking about what it should be funding.’

He announced that the University will also be re-launching the ANU Reconciliation Action Plan, under the guidance of the pro vice-chancellor of University experience, Richard Baker, and participating in the Science in Australia Gender Equity Athena SWAN project, which will help the university discover ‘how do we actually become an equitable campus, not one that just talks about it.’

Schmidt also noted the importance of improving safety on campus, in light of the Australian Human Rights Commission’s report into sexual assault and harassment on campus, released the day before.

‘I commit to you again today that I will not stop until we address this issue,’ he said. ‘This campus should be one of the safest places in Australia, and it is not yet.’

He also announced that the University would be seeking to expand its capacity in engineering and computer science, guided by ‘superstar of this university’ and Dean of the ANU College of Engineering and Computer Science, Professor Elanor Huntington, and Dr Genevieve Bell, who was Vice President at Intel before joining the university.

‘If you’re looking at how this university’s going to interact with society in the twenty-first century, it’s going to come using the thoughts and ideas in engineering, and how they intersect with the disciplines here at the ANU,’ he explained.

The university plans to release more information on this initiative in the coming month.

Six academics were also recognised as distinguished educators, ‘people who go way outside the norm to ensure that their teaching is absolutely superb’:

‘We celebrate you, and your teaching,’ Schmidt said.

Schmidt concluded on an apologetic note. ‘I’m sorry we didn’t get you enough food,’ he said. ‘You guys are really hungry!’