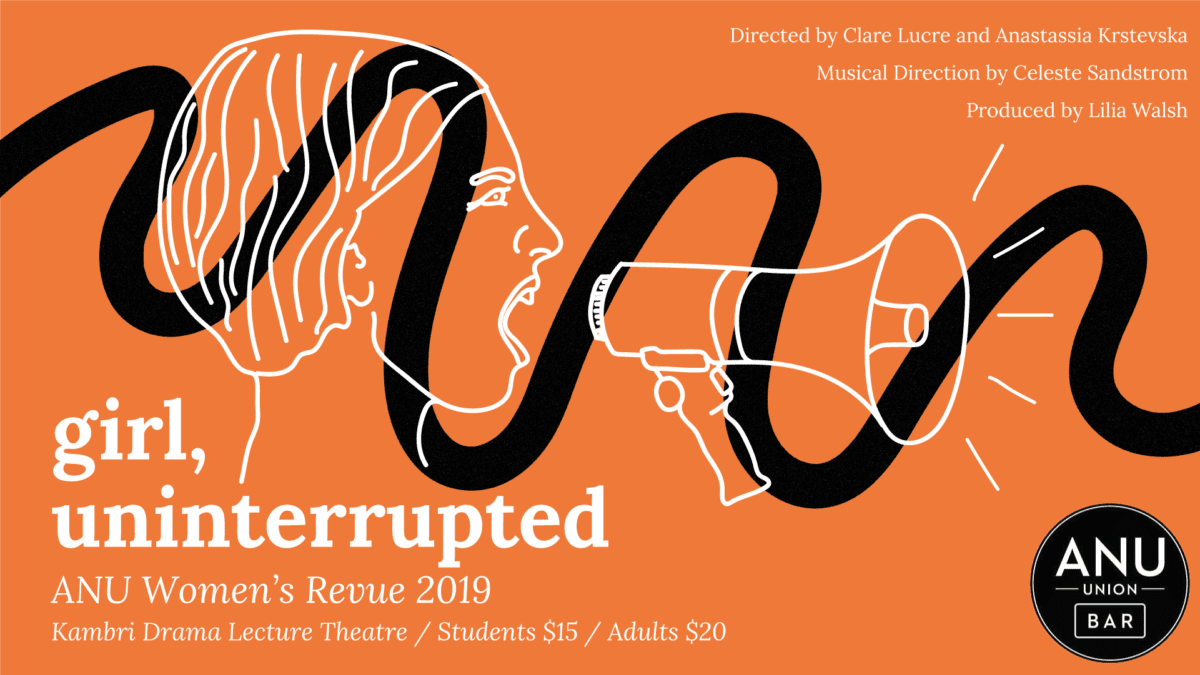 As of the production’s opening night, only one show had sold out and the buzz around the production is significantly less than in previous years.

For the past two years, ‘Women’s Revue’ has proven to be one of the most successful student theatre productions at the ANU. Notably, 2018’s ‘Well, Actually’ sold out well before opening night and was consistently praised by audiences for its strong performances and witty script.

While the revue cast of both 2017 and 2018 included ‘big names’ of ANU theatre, which encouraged student engagement, much of the team has remained intact for 2019. Co-directors Anastassia Krstevska and Clare Lucre both acted in ‘Well, Actually,’ and Krstevska has been involved since the inaugural production in 2017. Moreover, much of the cast are veterans of ANU theatre more generally.

Lilia Walsh, the producer for ‘Girl, Uninterrupted,’ notes that organising the venue has significantly impacted on the production’s marketing capacity.

“I’ve had to spend a lot of time preparing the space and that has limited the amount of time we’ve had to promote the show,” she outlined.

This sentiment is hard to miss. The promotional video posted to the Women’s Revue Facebook page shows little engagement outside of the cast itself, and the anticipated ‘Facebook drop’ of profile picture changes and event reminders reflect this. While the marketing of ‘Girl, Uninterrupted’ does somewhat represent a tonal shift away from the prior shows, Walsh again suggests that this is not the core issue.

“Essentially, we are too busy dealing with lack of promised resources to focus on promoting our show to the campus community,” she said.

Importantly, this is not an isolated incident. Lilia Walsh explains that “this is somewhat exemplified in the way the various productions have had to cancel or have been forced off campus by Kambri and the time-consuming lack of communication from them throughout the year.”

Walsh alludes to the cancellation of ANU MTC’s annual musical and the myriad of struggles that NUTS has faced throughout 2019. She continued, describing that Kambri is a hostile environment for student theatre, with “unaffordable” spaces and a lack of communication, it is nigh impossible for any production to run smoothly – let alone one as “fast-paced” as a revue.

Claire Holland, Artistic Director of NUTS, expands on this perspective:

“I do believe that it would be irresponsible to pin the blame for the inadequacy of the space solely upon Kambri as it is the ANU Development Team that holds the purse    strings and are either unwilling or unable to distribute the necessary funds towards student theatre.”

While the Kambri precinct may not be able to support arts at ANU fully, it appears that this is evidence of a more systemic disinterest on the part of the university to facilitate on-campus theatre productions.

Save the Arts: Theatre at ANU Fights Back

“Kambri doesn’t own the space. We can take problems to Kambri but they don’t have the power to issue funds towards major refurbishments that were asked of the space.”