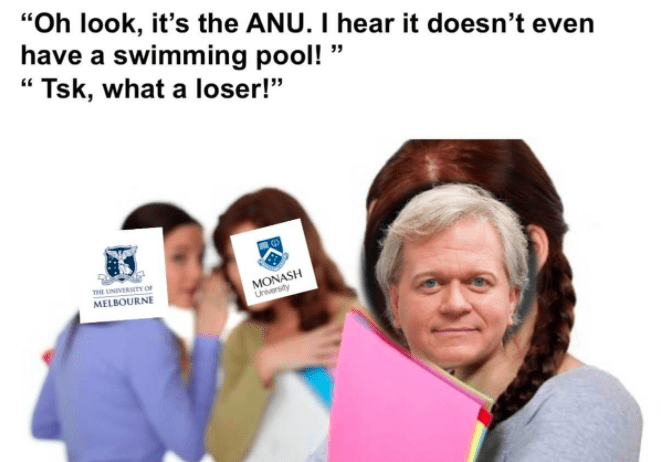 ​​STEMming the Tide of Inequality: Women in STEM Panel

It’s hard enough to turn up to university – you have to make new friends, learn new subjects, and maybe move into a new home.

And unless you were a keen Woroni reader in high school, you’re probably going to have a hard time knowing what older students are talking about when they complain about the Union Court redevelopment, returner applications or the AHRC survey.

If you weren’t at university last year, here were some of the community’s biggest talking points in 2017.

The construction at the heart of ANU is all about one thing – redeveloping the central precinct into a new student hub.

The project began in the middle of 2017, and is scheduled to finish at the beginning of 2019 — at a price tag of $220 million. The new Union Court — or as it will now be known, Kambri — will include two new student accommodation buildings, a student services hub, a new pool and gym, an underground car park, a bunch of classrooms, and food, bar and retail shops.

Throughout 2018, there’ll also be significant construction along ANU’s main thoroughfare, University Avenue. The plan is to revitalise the road with new trees and shrubs. This is what the Director of Major Projects, Robert Hitchcock, had to say about it:

“The work will involve a significant amount of excavation and re-grading, and is necessary to bring the site to a single level, creating greater accessibility for all people”.

Despite the construction, they are keeping a five of the large cedar trees due to their heritage value. ANU’s deputy vice-chancellor, Marnie Hughes-Warrington, wrote a touching blog about the trees, which you can read here.

If you’re at a residential hall, you’ll most likely need to fill out a returner application at some point. These applications are a way for colleges to determine which residents stay on next year.

So why can’t colleges just let everyone back in? It’s partly because ANU doesn’t have enough beds for everyone, and partly because they maintain their first year accommodation guarantee — when more and more first years come to ANU, the way the university makes space for them is by kicking out some later-year students.

At St Johns’ XXIII College, students were even more furious at the process. In one of our most read stories of the year, Woroni revealed that a petition signed by more than 180 students at the college said that the returner application process had “abused the trust our residents have in the administration”. There were claims that the process discriminated against students from distinct social groups.

In August last year, a long-awaited survey on sexual harassment and assault at Australian universities was released. It included responses from more than 30,000 students, and the results were damning: 51 per cent of student were sexually harassed on at least one occasion in 2016.

The survey, conducted by the Australian Human Rights Commission at 39 universities, also revealed that women were almost twice as likely to be sexually harassed than men.

ANU was overrepresented in the statistics: 116 ANU students were sexually assaulted in 2016, including more than 50 in residential colleges.

In response, ANU accepted all of the recommendations of the AHRC survey report. By November, the university had published a review that investigated ANU’s sexual assault procedures — but student critics claimed that the review was flawed because it did not consult with survivors of sexual assault.

Make sure to keep an eye on this story throughout the year: ANU is planning to do a second report, this time specifically exploring the sexual assault procedures of the university’s residential colleges.