Stupol Schoolies: Everything you need to know about NatCon and the NUS 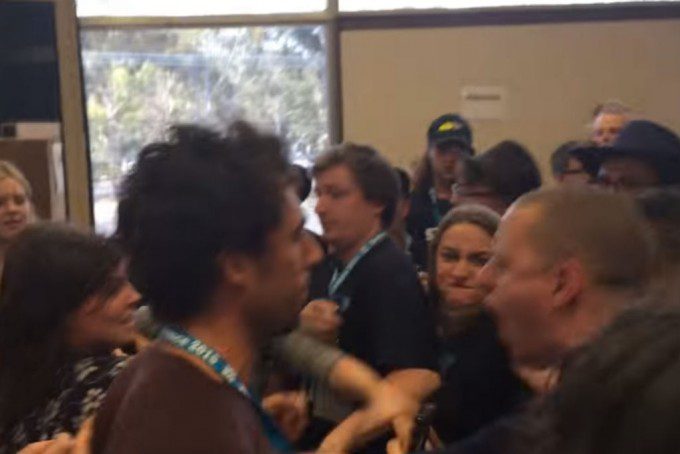 It’s made national headlines almost every year in the past decade, is fondly known by attendees as their version of schoolies, and kicks off tomorrow – here’s what you need to know about the National Conference and the National Union of Students.

What is the National Conference?

The National Conference (or NatCon, as it is known) is the Annual General Meeting for the NUS. It is attended by over 100 people, including official delegates from member universities and observers. Every accredited student organisation — that is, those who have paid an accreditation fee — is able to send voting delegates. There are discussions about policy, elections for executive positions, and reports from outgoing executive members. This year, the conference will be held in Geelong from 11 to 15 December.

The number of delegates that an accredited university can send to NatCon and their total number of votes is different for each institution. The formula is based on the number of Equivalent Full Time Student Loads (EFSTLs) at each university.

The ANU, if accredited with the NUS, would only send five delegates to NatCon.

For quorum to be met and sustained at NatCon, 50 per cent of delegates and 50 per cent of votes must be present. Hence, quorum can be pulled if a larger faction leaves the room. This is a tactic that has been used by factions at previous National Conferences to void motions or disrupt votes. Violent confrontations have occurred with factions physically blocking exits from the venue to keep quorum. Leaked footage from the the 2015 National Conference showed members of the Socialist Alternative blockading Unity from pulling quorum (this footage has since been removed from YouTube).

What is the National Union of Students?

The Australian National Union of Students, or the NUS, acts as the peak representative body for Australian undergraduate university students. The organisation, in its current form, was founded in 1987. The NUS aims to represent the interests of tertiary students across Australia through campaigning, political lobbying, and activism. In recent years, this has focused on fighting deregulation of university fees through National Days of Action and making submissions to the federal parliament.

The National Union of Students is dominated by factions. Being part of a faction means that you are bound by how your internal ‘caucus’ votes. These factions include:

According to Farrago,  the factional breakdown this year is 45 per cent Unity, 17 per cent NLS, 17 per cent SALT, 5 per cent ALSF.  The remaining 16 per cent is shared between the National Independents, Grassroots, and indies.

There exists a so-called ‘sweetheart deal’ between the NLS and Student Unity. As the two factions control the majority of votes, this deal ensures that the majority of National Executive positions are held by either the NLS or Unity. This deal also has ensured that the Presidency is held by a member of the NLS whilst Unity usually controls the General Secretary position. This has been the case since the inception of the NUS in 1987 except for in 2007 when the General Secretary position was held by Matthew Chuk, an independent from the University of Western Australia.

The NUS runs a number of conferences during the year including the NUS Education Conference (EdCon), the National Conference (NatCon), and the President’s Summit. With the exception of NatCon, the conferences focus on networking and skill-building of delegates through keynote speakers, workshops, and panels.

*Every affiliated university in Tasmania, Queensland, and the ACT have now disaccredited from the NUS in 2017. The ACT State Branch will dissolve after the 2017 National Conference.

How does this impact ANU students?

In 2016, the Student Representative Council of the ANU Students’ Association voted to disaccredit from the NUS. This means that the ANU did not have a vote at the 2016 National Conference and our elected representatives attended as non-voting observers.

In 2017, the ANUSA Student Representative Council voted initially for accreditation for the NUS. Tom Kesina, a 2017 General Representative and former NUS observer, moved a motion for conditional accreditation. The conditions were focused on better governance with publishing minutes and reports on the NUS website.

“That the ANU Students’ Association reaccredit with the National Union of Students for the amount of $5,000, but the amount is not to be transferred until all of the following conditions are concurrently met.

All National Executive minutes & Office Bearer reports are made available on the NUS website (at least from all of 2016 and the 2017 ones available);

The 2016 National Conference minutes are made available on the NUS website;

The full audited financial report is made available to member organisations, with the missing two pages from the auditor attached;
National Executive appoints a Returning Officer who is not a current or former member of any NUS faction;

A guide explaining how to NatCon (consistent with Laura Campbell’s reforms and the letter sent to the 2016 SRC by the NUS) is created and distributed;

That the current budget of the NUS, once approved, be published on the NUS website.”

On 14 November 2017, the NUS directly violated the fourth condition with the appointment of a former Student Unity member as the Returning Officer for National Conference. Hence, ANUSA will not accredit in 2017 and the ANU will not have voting delegates. As normal observers, our NUS representatives have the right to move and second motions as well as speak to the conference floor on motions. Howard Maclean and Harry Needham, the ANUSA Education Officer, are both attending as non-voting observers to the 2017 National Conference. Tess Masters, Cameron Allan, and Freya Willis have said that they will not be attending the National Conference.

So why should we care?

The NUS accreditation debate has been occurring at the ANU for decades. Many student representatives criticise the organisation for poor management (both financial and governance), poor representation of autonomous groups, the toxic environment of NatCon, and the saturation of factions. Former ANUSA President, Ben Gill, told Woroni in 2015 that he couldn’t ‘understand how anyone can advocate that we [ANUSA] should pay so students can attend a conference in which they are likely to be verbally abused’.

Those who are anti-accreditation with the NUS are typically pro-unions and pro-collective action to represent students, but they don’t believe that the NUS is an effective mechanism for this. Instead, they believe that the ANU is uniquely situated to lobby the government due to proximity and that students should take advantage of this in their campaigning and advocacy.

The debate around NUS accreditation will occur again in 2018 as ANUSA continues to budget for fees to the NUS. In the 2018 provisional budget funded through SSAF, the Student Services and Amenities Fee that all students pay, there is $13,000 allocated to accreditation fees, not including travel costs and registration fees for delegates or observers. It will be up to the members of the 2018 Student Representative Council to decide to accredit with the National Union of Students.

For discussion on specific NUS policy, NUS Observer Howard Maclean has set up the Facebook group and Discord chat called ‘The NUS Room’. For updates during the National Conference, Woroni will be reporting live and Harry Needham has brought back his twitter account just for NatCon.

If you believe any of this information is incorrect or if we’ve missed something, please email us at news@woroni.com.au.

Kat Carrington was the 2016 ANUSA College of Arts and Social Sciences Representative and hence sat on the ANUSA SRC for that year. She voted against accreditation in 2016.

*Editor’s note (11/12/2016): An earlier version of this article did not mention the ATSI Officer in the list of positions in the NUS National Executive. This article has since been amended to correct this. We apologise for the error.