Students won over by new Pop Up Village 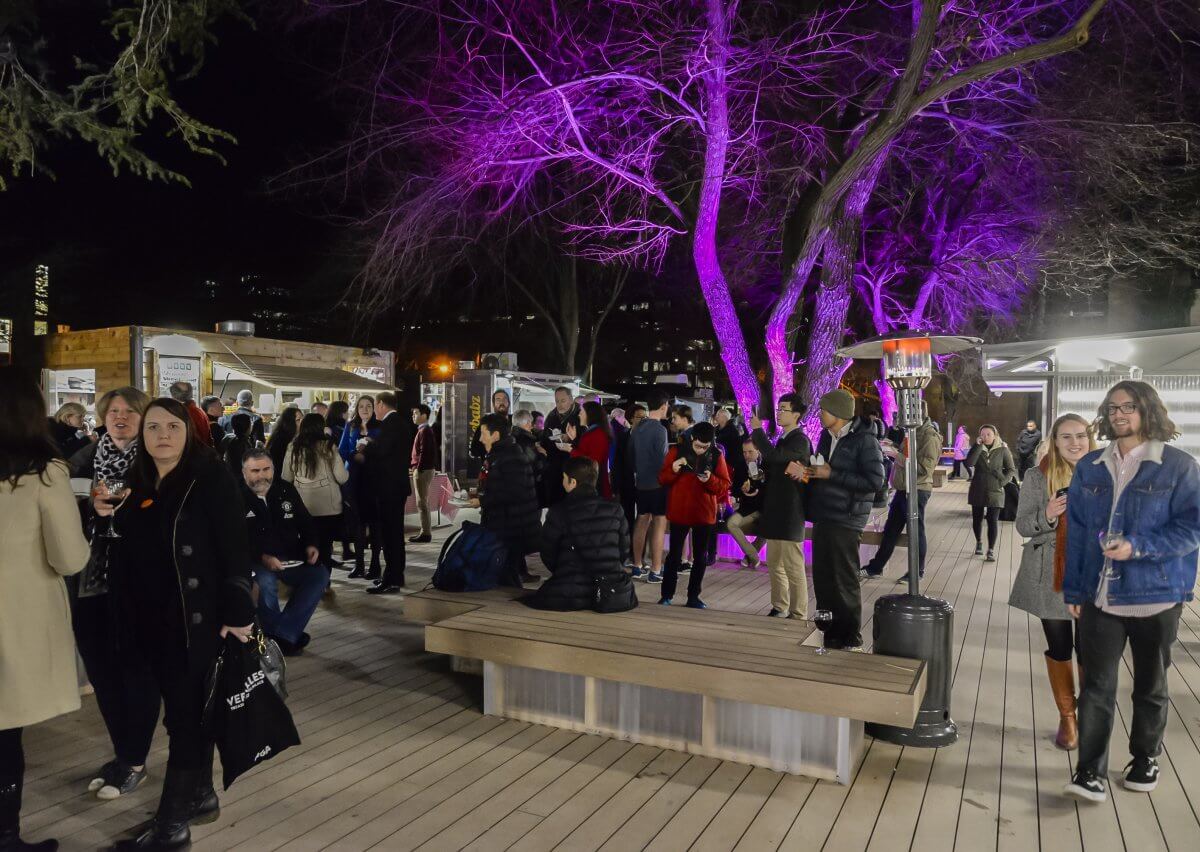 Woroni reporters Bella Di Mattina-Beven and Josie Ganko braved the cold for a first look at the new pop-up village.

The ANU community was given their first chance to explore the heart of the university for the next 18 months when the pop-up village was officially opened on Tuesday, 11 July.

I for one can confirm that I was pleasantly surprised by what I found: a well thought out and aesthetically pleasing space that provides a diverse range of services and food options.

I would go as far as to say that the food-vendors provide a far more exciting range of cuisines than what was available in the old union court. My sampling of each signature dish from the new food trucks confirmed that I’ll be a regular customer of the pop-up village.

While the abundant free food offerings and live music may have influenced my initial thoughts, I hold firm in my view that the pop up village is a great success.

The RE:Union development team has managed to do a lot with very little. The main food court is a simple wooden frame with plastic sheeting, but the contemporary furniture, hanging bulbs and plants give the space a modern, fresh feeling. While the structure is obviously temporary, they have still managed to give it some sort of personality. Furthermore, the opening night’s live music performances demonstrated the spaces great potential as a live music venue.

The new Molo Live is aesthetically pretty cool and shaping up to be a trendy stand in.  While it may not be the ANU Bar, it can definitely fill the void until the return of a more permanent watering hole.

The formal proceedings of the evening included a welcome to country, speeches from ANUSA representatives, the vice-chancellor, Brian Schmidt, and the ACT chief minister, Andrew Barr.

The speakers all expressed their excitement as to the growth of the ANU campus, and the potential to engage the wider Canberra community in the ANU’s ongoing development.

Schmidt expressed his concern that they won’t want to tear down the pop-up at the completion of development, a worry that I can understand after wandering through the vibrant new village.

Despite the ANU community’s initial trepidation, there’s a good chance that in 18 months we will be sad to see the pop-up village go.

On arrival at the pop-up village launch, the space seemed to entertain the ideals of a wine bar for an executive in their mid-40s. However, students have embraced the space and are excited about the role it will play in student life. With the RE:Union Court development potentially facing delays, and the pop-up village potentially settling in as a more permanent fixture, it’s lucky there’s been such a warm reception.

At the start of the launch, most of the people wandering around the space were not students, but staff, and people part of the pop-up build. Only a handful of students braved the cold in search of free food. I feared that this space wasn’t built with students in mind, despite removing their key place of socialisation.

Speaking at the launch of the Pop Up Village, the vice-chancellor, Brian Schmidt, said that he hoped the ‘swish’ temporary hub would ‘open the campus to the Canberra community.’  These sentiments were echoed by the ACT chief minister, Andrew Barr.

Schmidt also thanked the ANU School of Art and Design – for their collaboration in creating the signage in the Village. It was the first mention of the extensive student consultation and collaboration that permeated the later stages of the pop up village plan and build.

The ANUSA social officer, Cameron Allan, said his fears that the village would be ‘a bit dystopic’ were unfounded, as management were ‘keen to work in partnership with ANUSA and other student bodies on campus.’

As the speeches wrapped up, more and more students braved the Canberra cold to take advantage of the free drinks, and wait patiently for free food.

By the time the food trucks were serving generous samples of food, what student body remained at ANU for winter had descended, and Pho, Burgers, Cronuts, HSPs and Bao buns were snapped up as an easy meal.

When Woroni spoke to students, any suspicion that the space wouldn’t be for them was gone from their minds. One student said ‘it’s amazing… really amazing’. Another betrayed the typical sadness at the loss of the ANU Bar to say ‘it’s way better than Union Court’.

This enthusiasm doesn’t seem to have evaporated with the free food. The space has been buzzing since the 11 July launch, and more examples of student collaboration and interaction have been seen. It plays an integral role in ANUSA’s ‘Feast of Fire’ Bush Week festivities, and a regular collaborative student music session is also being advertised.

Schmidt said ‘we’re not gonna want to get rid of the thing’ – with the delays faced by the RE:Union Court development, its continued presence will likely be celebrated.