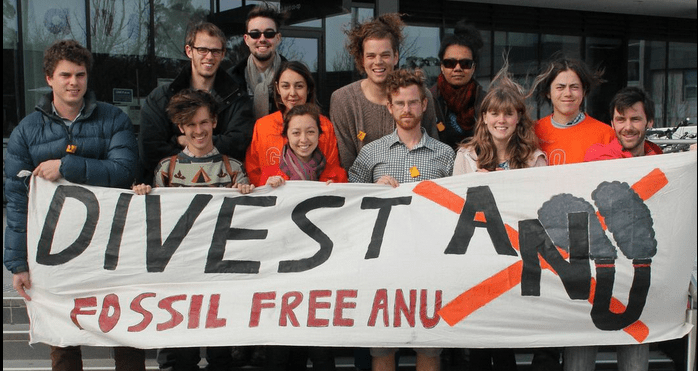 Protesters gathered outside the Chancellery building last Friday morning, calling on the ANU to divest fully from companies which extract fossil fuel.

Around 40 students, staff, alumni and community members called for the demands for a ‘fossil free ANU’ to be recognised on the committee’s agenda.

Under particular focus was the reinvestment of the university in four resource-extraction companies, including Santos, whose climate policy commits to a four-degree increase in global temperatures.

This limit is twice as much as the two degrees above pre-industrial levels agreed on during the Paris Climate Talks. Even a two-degree increase would lead to increased flooding, changed coastal environments, and significant ecosystem damage in Australia.

The vice-chancellor, Brian Schmidt, who spoke to the protesters on his way into the Chancellery, expressed his support for the goal of a two-degree limit, and noted the importance of climate action, but said that now was not the time for a strategy of total divestment.

The group’s responses were mixed. ANU student Bella Himmelreigh told Woroni that she ‘found it heartening, that Schmidt recognises that the two-degree limit is important, but frustrating that he doesn’t realise divestment is a crucial step.’

Another speaker argued that ‘Brian Schmidt can whizz around in his Tesla … but the university’s still a wet blanket in terms of leadership’ on climate change.

Speakers also pointed out the lack of attention to climate change in this year’s federal Budget, and hoped that the actions of Fossil Free ANU members could bring more notice to, and discussion around, the issue.

The protest aimed to create enough noise that divestment ‘has to go on the [finance committee’s] agenda.’

Himmelreigh, who also questioned Schmidt when he recently appeared on Q&A, expressed frustration at the university’s response to ongoing pressure from the organisation.

‘ANU doesn’t think we should be involved in the decision-making process,’ she said, noting that despite being willing to meet with representatives of Fossil Free ANU, the university appears uninterested in acceding to their demands.

‘It’s clear that meetings don’t make much difference, and we need a public display to get stuff moving.’

The protest included a wide cross-section of the Canberra community. ANU students and staff were joined by those from the University of Canberra, and both young and older community members were present.

One student told Woroni: ‘I’m here to understand what ANU is doing, where we’re at, and what we need to do going forward.’

Another expressed frustration at the university’s apparent lack of understanding with regards to Fossil Free ANU’s goals.

‘They don’t seem to understand that it isn’t just about the university’s emissions, this is a community issue,’ he said.

At the post-protest debrief, discussion ranged from the debate around the Adani mine, to the role of Indigenous knowledge in fighting climate change. But ultimately conversation returned to the university.

‘But we’ll keep building and building until they can’t ignore us.’