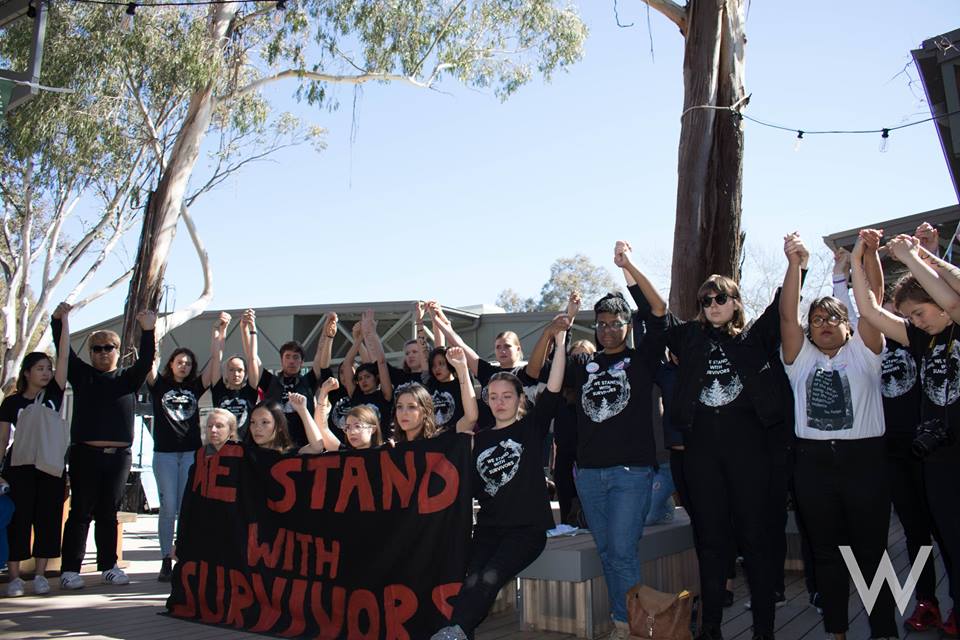 The 2017 academic year was rocked by the Australian Human Rights Commission’s survey on sexual assault and sexual harassment.

With the responses and recommendations released on 1 August, advocates from ANUSA, PARSA and Restorative ANU have worked with the ANU to ensure adequate support for survivors. Advocates have also been holding the ANU to account as the University begins to alter ANU policy.

The report was released to the public on August 1, although it had been made available to university administrations across Australia weeks prior. The advance notice allowed the ANU to ensure the new counsellor from the Canberra Rape Crisis Centre would begin at ANU early to provide additional support.

It also allowed them time to craft a response to the huge media outcry which the survey caused.

‘I also want to say sorry to any student, to any staff member, to any member of our alumni community who has not received what they needed from the University in dealing with sexual harassment or sexual assault,’ the vice chancellor, Brian Schmidt, said in a press conference, and again in a blog post.

The day featured a ‘Sit In and Speak Out’, co-ordinated by ANUSA and PARSA, and the women’s and queer* departments. The protest, which was held to coincide with a meeting of the vice chancellors, was widely attended and featured prominently in media reports.

Students spoke of an institutional failure to provide adequate reporting procedures, which resulted in disclosures being disregarded, mismanaged or provided to others without the consent of the survivor.

The report found that 57 per cent of ANU students had been sexually harassed or assaulted, with a disproportionate number saying that this occurred on campus (35 per cent).

The ANU was worse than the national average by a wide margin. The report also found that it was those in residence, completing Higher Degree Research or identifying as a minority that faced the most sexual violence.

In response, the ANU accepted all of the AHRC report’s nine recommendations. These include an independent review, which has now been completed.

Advocates quietly suggested that the ANU was not willing to spend money on such a broad review into sexual violence at the ANU. However a spokesperson for the ANU asserted that the remit of the review had not changed.

Schmidt said at a student forum with students that the lack of consultation was due to the time it would take to provide a safe environment for survivors to participate.

‘It would have caused more hurt and trauma,’ he said. ‘For the review for the procedures and other things it was my view that it would put a delay into the procedure that I found unpalatable.’ He hoped that the swift return of the report, which was provided to the working group two weeks overdue, would allow ANU to quickly redress the most pressing issues.

On the decision to not include women’s officers in the committees, Schmidt said: ‘It was put to me that the broader student representatives would be more effective’. He also indicated that the chair of the committee, Donnelle Wheeler, was in support of this.

An ANU spokesperson said that the student community ‘would be kept informed,’ but would not comment on whether students would have full access to the review provided by Rapid Context.

The spokesperson was also evasive on the topic of the ANUSA/PARSA demands. The most radical demand was for a centralised policy on sexual assault and sexual harassment, and the disclosure or reporting procedure. Such a policy would include specialised staff and a centralised location.

However the ANU is yet to suggest they will be acceding to this demand. It is unclear how ANUSA and PARSA will respond to the ANU’s rejection of demands, particularly as those who have led the charge on the demands leave their current positions.

Other demands for restorative justice have been taken into consideration, with a pilot project undertaken by Richard Baker, pro-vice chancellor for student experience. The reference to the project by Schmidt took students by surprise.

Restorative Justice has been an essential element of long-standing sexual assault advocacy, with advocacy groups campaigning and protesting on campus for several years. The pilot project is being undertaken in conjunction with Regnet, an ANU School which has a Centre for Restorative Justice.

ANUSA and PARSA also suggested that the ANU’s module on consent could be built upon. They called for community standards, and training on consent and sexism to be a prerequisite to enrollment at the ANU. It appears that the ANU is broadening their implementation of the Consent Module, with returners to ANU halls of residence required to complete it if they wish to return to their hall. However the ANU does not have further plans for more interactive training on sexism and related issues.

ANUSA and PARSA continue to advocate for greater support for ANU Counselling, which is often seen as overburdened and underresourced. The ANU and ANUSA/PARSA have jointly funded a professional trauma counsellor to begin working at the ANU, a feat which ANU heralds as a nation-first. The counselor has been funded for two years, and ANUSA is pushing for their placement to be extended.

ON HIGHER DEGREE BY RESEARCH

Postgraduate and HDR students are more vulnerable to sexual violence on campus, as the survey saw them disproportionately represented. The PARSA women’s officer has called for better training and systems in place for supervisors of students. At a second report back, Professor Imelda Whelehan suggested a register was needed.

‘We need registration for supervisors. At the moment there isn’t a register, so we can’t deregister supervisors,’ suggesting that staff members who cross boundaries in their role continue to supervise students.

The ANU will soon implement training for supervisors on the nature of their role and their obligations, particularly in light of the report.

These measures are welcomed considering the large power imbalance in the relationship between a supervisor and student.

Whelehan said ‘The supervisor relationship is dangerous, because often the learner is reliant on one person, and they often hold the keys to a particular industry or employment prospect.’

Students continue to lobby the ANU for comprehensive action, particularly a centralised policy. A key aspect of this was a ‘Sit In and Speak Out’ held by students on Open Day at the Pop Up Village. The event came as prospective students and parents gathered for lunch, and was aimed at providing awareness of the issue of sexual violence at the ANU.

Advocate Codie Bell suggested the event was also to provide prospective students with awareness of the advocacy groups there to support them. She said the engagement with prospective parents was particularly striking, with many mothers saying they had protested on similar grounds thirty years ago.

The two main tickets for ANUSA, Shake Up and victorious Lift ANUSA, both promised continued advocacy on sexual assault and sexual harassment. While James Connolly, outgoing ANUSA president, accused the tickets of politicising the issue (especially Shake Up’s claim that they were ‘objectively better’ on sexual assault), there is undoubtedly genuine intent behind the tickets’ claims.

The president elect, Eleanor Kay, is a 2017 executive member and thus has strong working knowledge of the ANUSA/PARSA demands. The successful Shake Up candidate for the NUS delegate role, Freya Willis, was a women’s department deputy officer, and played a prominent role in Sit In and Speak Out events.

The ANU has obviously begun to implement some key changes to the support and training provided, so that staff and students are aware of their rights and obligations in their respective roles. The survey has provided some much-needed and often called for urgency to the changes to ANU policy.

In the coming year, Woroni will continue to report on the policy changes that result from the Rapid Context report, which so far is unavailable to all but the executive and the student representatives they use as their rubber stamp.

However it seems that the ANU has listened to some of the advocacy that ANUSA, PARSA, departments and Restorative ANU have provided in their projects on restorative justice, counselling support and training programs. These advocates have committed to continued lobbying of the ANU to ensure that students have access to due process, consistent support and a safe and respectful ANU.