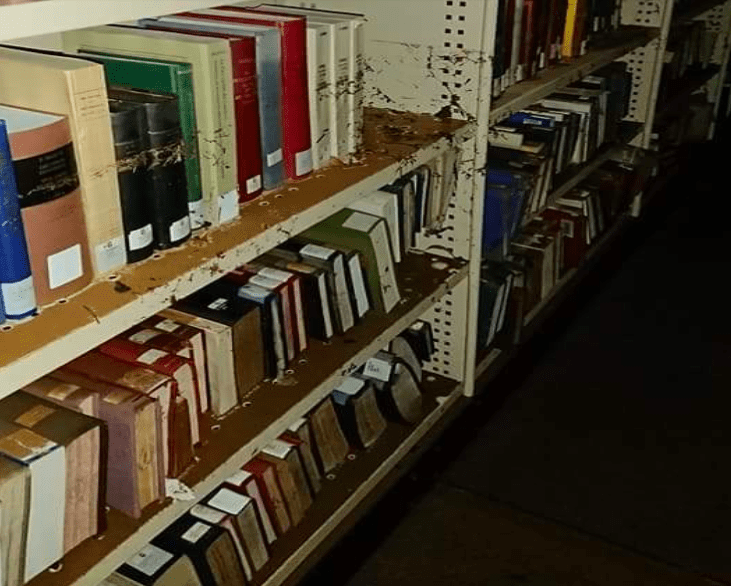 While some of Chifley Library’s collection has suffered irreparable water damage from Sunday’s flood, ANU head librarian Roxanne Missingham has revealed that old and rare books were not affected, and an expert conservator was assisting the library to assess the devastation.

In a statement released on Thursday morning, Missingham said that arrangements have been made and a recovery effort begun after the lowest level of Chifley Library was inundated with water from a dramatic flash flood that caused Sullivan’s Creek to break its banks.

Missingham, who oversees the administration of the ANU’s five libraries and print repository, noted that all staff were safe and had been relocated to other branches. Woroni understands that most of Chifley’s librarians have been moved to Menzies library, and Missingham noted that staff have begun “expanding their collection knowledge” in order to be able to assist students and academics in the new setting.

Speculation on social media about the extent of the damage to the collection was rife after images circulated showing a watermark reaching halfway up the third shelf of the library’s first level compactors. Missingham confirmed this morning that the damage was extensive, affecting “microform collections, books and journals in particular history, parliamentary papers, politics, philosophy and anthropology.”

Luckily, however, the library’s rare and old books were unaffected, having been stored in the Menzies Library as well as offsite.

Despite this good fortune, there remain some materials on the floor which, if damaged, are unlikely to be able to be substituted. ANU Historian Frank Bongiorno lamented on Twitter the potential loss of  “Australian (colonial/state/national) parliamentary papers and debates – much that will be impossible to replace.” Bongiorno joined Deputy-Vice Chancellor Marnie Hughes-Warrington in extending an offer to lend out history and historiography materials to ANU history staff, PhD and Honours students.

Students will still be able to access materials from the third and fourth levels of Chifley Library by placing requests with staff at Hancock Library, said Missingham. However, materials will be collected by staff once per day, meaning students will need to place requests as early as possible in order to avoid a potential wait time of up to 24 hours.

In order to facilitate increased usage, Hancock Library will have its opening hours extended to 10pm on Fridays and open from 9am on Saturdays and Sundays until Chifley Library is able to reopen.

Students and academics who require materials from Chifley Library’s lowest level need not despair: from Monday 5 March, Library Services will facilitate inter-library loans for materials which are either damaged or remaining on the damaged level.

Missingham stated that an “expert conservator” was consulting with the library on what could be salvaged, and noted that it would be necessary “to rebuild the collection in collaboration with the academic community.”

“Any material that was returned to Chifley Library on the weekend has been processed and will not be listed as overdue”, she said, and stated that students who have been unable to return books should contact the library. The library will “waive any overdue fines” which have been incurred as a result of the disruption to the library’s normal operation.

Both the short-term loan material and reserve collection have been moved temporarily to Hancock Library, Missingham said. IT support can similarly be accessed at Hancock at usual times.

“We are very very grateful for the messages of support and thank students and academics for their patience”, Missingham concluded, “I would like to thank everyone for their patience and support through this difficult period.”