‘Science for all’ the Call of Canberra’s March for Science 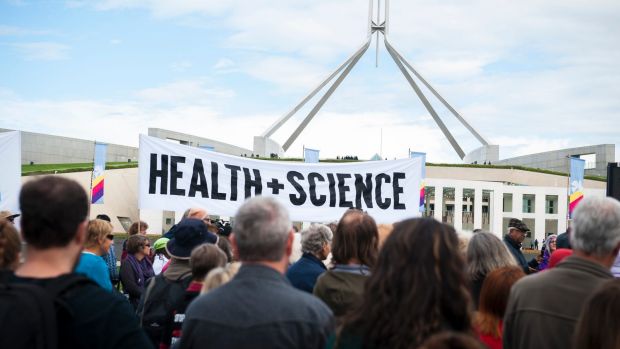 The Canberra March for Science, one of 600 rallies held in 54 countries, drew more than 1000 participants outside Parliament House on Earth Day, 22 April.

Those at the rally called for a federal commitment to publicly accessible and well-communicated scientific research, science education, evidence-based policy making and stable investment in science.

The march’s organisers described their hopes for the march as ‘to use this as a starting point to take a stand for science in politics, and to encourage scientists to be more active participants in representing the results of their research.’

The gathering included students, teachers and researchers, as well as community members of all ages. Despite the diverse attendance, the group was united by concern at the increasing dismissiveness politicians around the world appear to be showing to the practice and resulting evidence of science.

Professor Will Steffen, formerly of the ANU’s Fenner School of Environment and Society, noted that there is an increasing focus on science that brings quick economic gain, but argued that this ought not to be the case.

‘Good, publicly-funded science is in the public interest,’ he said, ‘We have to make sure the planet gets back on the habitable path.’

Professor Emily Banks, from the National Centre for Epidemiology and Population Health at ANU, agreed that science should seek to help everyone, especially disadvantaged communities, pointing out the vital place modern medicine held in benefiting people all over the world.

‘Those who seek to undermine science also take it for granted,’ she said, pointing out that they would expect reliable antibiotics if they fell ill, and listing the kind of colourful cures that were all people could rely on before scientific developments in medicine.

Other guest speakers looked to their own fields of interest to illustrate the powerful impacts of science, as well as their goals for the future.

Karlie Noon, who is currently studying a Masters of Astronomy at ANU, spoke on the connection between first nations’ and western systems of scientific knowledge. A Kamilaroi woman from Tamworth, she shared her dream of a logical, peaceful world brought about by western science respectfully engaging with first nations’ wisdom and connection to the land.

‘There is no point listening to politicians who do not understand this link [to the land],’ she said.

Geoff McNamara, a well-recognised science teacher and the force behind the creation of the McNamara-Saunders Astronomical Teaching Telescope (MSATT) at Mount Stromlo Observatory, looked to the next generation.

‘Science literacy shields us from misinformation,’ he said, before noting that having a scientifically literate population that thinks critically, demands evidence and accepts findings when they come requires more than good science communication.

‘We need to stop regarding science as just another subject, and regard it as critical for kids,’ McNamara said, pointing out that although inspiring the next generation of researchers was important, science literacy was necessary for everyone’s day-to-day lives in the modern environment.

The march fulfilled its aim to be a family-friendly gathering, with many young families joining in. With many scientists who attended toting placards inviting participants to ask them about their field, the march had a celebratory atmosphere, feeling as much like a science fair as a protest.

‘It’s good to see the turnout, to see people get their nerd on,’ Anna Zovaro, an ANU PhD student, told Woroni.

There was a strong ANU contingent, not just in the guest speakers, but also the marchers.

Trent Kelly, an ANU alumnus who now works as a forensic scientist, told Woroni he attended because of his concern about the decline in critical thinking and increase in shortcuts and short-term solutions in the current political environment.

He said that in the often-competitive field of science ‘it’s good to see people championing a unity of purpose.’

Many more than STEM students turned out to march in support of better federal backing for science.

‘I love the idea that it’s not just science people who actually came,’ PhD student Estee Tee explained, ‘they realise we’re all in this together.’

As well as endorsing the march’s goals, Tee attended to support McNamara, who was her high school science teacher.