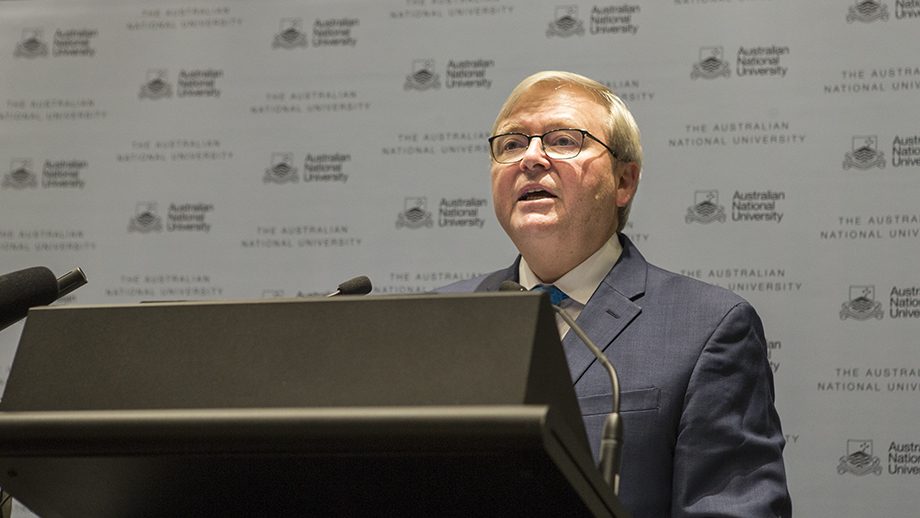 Former prime minister Kevin Rudd warned an audience at the ANU on Monday 13 February that unless Aboriginal child protection policy is changed, a growing number of Indigenous children will be removed from their culture.

Rudd was careful to distinguish between the Stolen Generations and the current issues surrounding relocation of Aboriginal children. He emphasised that the current problems in this area pale in comparison to those created in the past under racially-driven government initiatives. But he was quick to raise the alarm over the risks of poor government policy creating ‘another generation of young Aboriginal children unnecessarily separated from their culture’.

Rudd isolated the growing relaxation of the Child Placement Principle – a guideline designed to keep Aboriginal children in Aboriginal families even when they are removed from their original families – as a key driver of contemporary cultural separation. The principle, which is contained in legislation across all Australian jurisdictions, faces difficulty in implementation due to its being time-consuming and costly.

In 2015, 15,432 Aboriginal children were situated in out-of-home care, with almost a third being relocated in a manner not in accordance with the policy. A reflective Rudd lambasted this failure, stating, ‘no Indigenous organisation was consulted, no extended-family carer was found, no community carer was found. These kids were taken away.’

In addition to his insistence that the Child Placement Principle be adhered to, the need for a new policy focused on prevention of family breakdown was also highlighted. Between 2006 and mid-2015 the number of Aboriginal children in out-of-home care grew by almost 9,000 – an increase of over 100 percent. Speaking on this trend, Rudd was adamant that something urgently needs to be done and criticised the government’s $500 million in cuts to various Indigenous programs as ‘extremely unhelpful’.

In spite of criticism that the targets of his Closing the Gap program have not been met, Rudd was adamant that jettisoning the program would be a mistake and a faddish political re-brand, rather than a genuine attempt to advance Indigenous policy. In addition to the seven targets of Closing the Gap, Rudd restated his support for two new targets, relating to Indigenous higher education attendance rates and Aboriginal incarceration rates.

Rudd ended the speech by indicating that he remained optimistic that real solutions may be found for seemingly intractable issues. He furthermore announced a personal gift of $100,000 to the National Apology Foundation, as part of his efforts to close the gap.

With the last Closing the Gap update, given by Prime Minister Malcolm Turnbull on 14 February, revealing that six of the program’s seven targets are not on track, it appears as though we are far away from ending the disadvantages faced by Indigenous Australians.