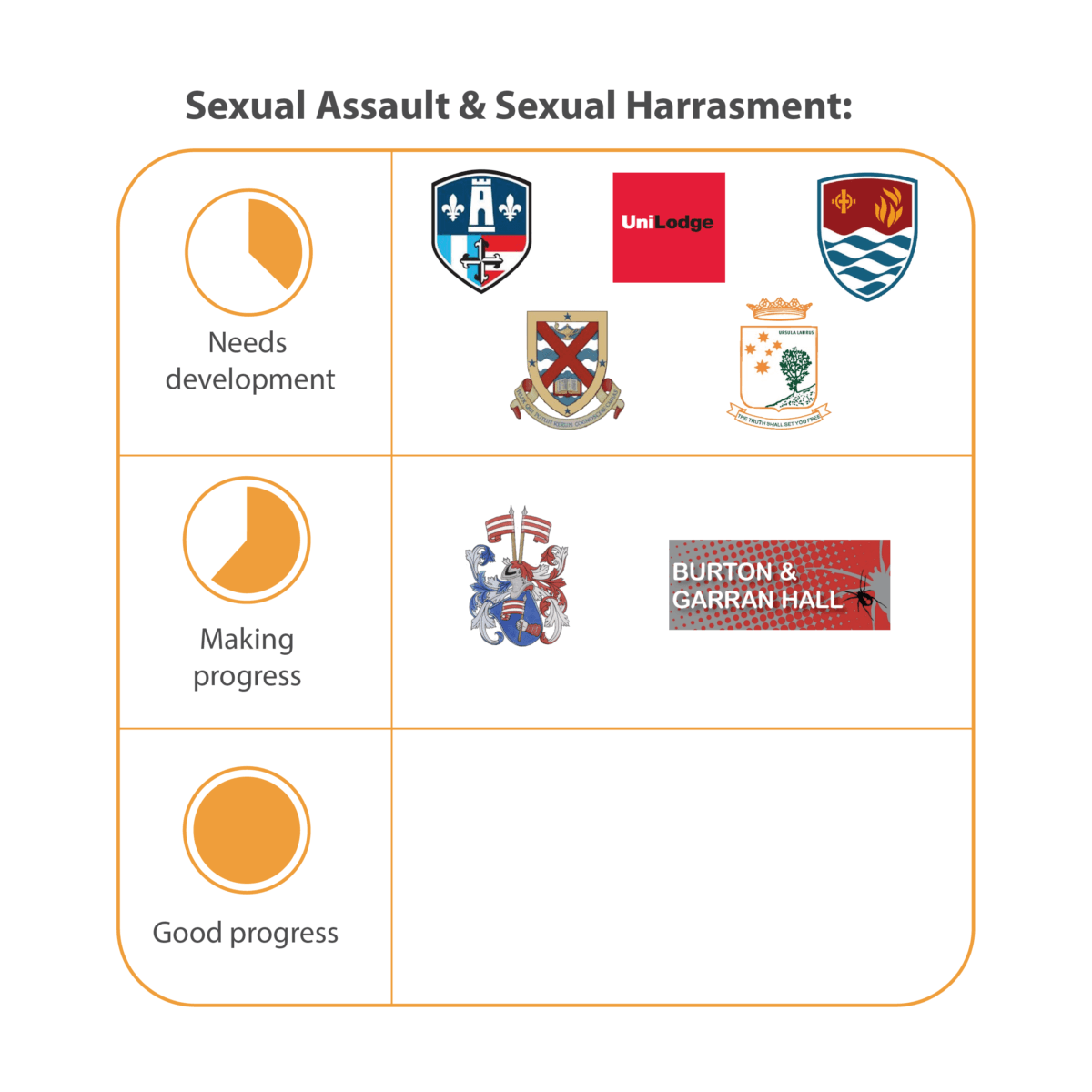 The Nous Group’s review into sexual assault and sexual harassment (SASH) at the ANU’s residential colleges, completed at the end of 2018, has highlighted a dire recent history.

Released following a Freedom of Information request, the review outlines that of the ANU’s 10 primarily undergraduate residential halls, eight were found to have “significant room for improvement.”

Most notably, many of the halls’ failings stemmed from systematic inadequacies in responding to reported SASH incidents.

Multiple of the ANU’s colleges were found to not have consistent and transparent policies around responding to incidents of SASH. The review illustrated the presence of broken trust between students and college staff regarding the handling of previous complaints. Including student perceptions that at some halls, the administration did not follow due process, act transparently, or they “protected an alleged perpetrator at the survivor’s expense.”

It was found that at Burgmann College, numerous inadequate responses to SASH were viewed by students to have contributed “to a culture of under-reporting.” Additionally, the review described students’ fears that disclosing SASH had become stigmatised, which subsequently cultivated concerns that these disclosures were not considered serious enough to pursue.

Student feedback highlighted that at John XXIII College, there was at least a perception that some previous allegations of SASH have been handled in such a way that the alleged perpetrator is not held to account and may remain at the college.

The review detailed that a survey of residents and alumni at Ursula Hall perceived that only one in three respondents who had reported an incident of SASH “felt listened to and believed.”

At Bruce Hall, the review found that students indicated “that they are more likely to rely on friends as well as student leaders for support for incidents” of SASH. Additionally, the review described that resident’s felt that they “ cannot access the existing support systems if they do not know that they exist, and that clearer communication about help-seeking options would be beneficial.”

Across the four UniLodges, residents conveyed that they were unlikely to progress to formal reporting of sexual assault as they perceived a number of roadblocks to the continuation of the process. These roadblocks included “barriers to understanding policies and procedures, interacting and forming relationships with peers and student leaders, and limited accessibility of and relationship with staff.”

Most notably, multiple colleges received the lowest possible rating in the provision of security facilities and residential staff’s ability to create a culture of accountability around SASH.

The review concluded that only John XXIII College’s security and facilities were classified as  “operating at a high standard as compared with best practice.”

One of the main concerns raised by the review was students’ safety after dark. Notably, the review highlighted concerns around alcohol and substance abuse in areas adjacent to multiple colleges.

Students from Ursula Hall raised concerns around the hall’s ability to secure residents from “the presence of drunken students and…potentially predatory behaviour.” Specifically, the review described the need for a greater CCTV network and improved lighting.

Additionally, the review raised how inadequate facilities have criticised the safety of residents at Burton and Garran Hall. It illustrated that due to ineffective doors and locks “anybody can access” resident’s rooms.

In regards to the proficiency of residential staff, the review found that of the majority-undergraduate halls, only Fenner Hall was not considered to have room for improvement.

The review highlighted that as a result of staffing personnel and structure, residents did not feel comfortable accessing SASH services in multiple colleges. It detailed that this is partly because some felt uncomfortable with the nature of the language used by staff in relation to the gender dynamics within the college.

At UniLodge, the review outlined that student leaders are too heavily relied on to provide pastoral care services. Such an occurrence eventuates from an overly broad set of responsibilities placed upon a small number of staff members.

At Bruce Hall, “there was generally a passive or inactive approach to responding to complaints of inappropriate behaviour,” and that this behaviour eroded student confidence in the residential staff’s interest or willingness to act upon reported cases.

More encouragingly, the review found that all residences on and off campus were making progress in terms of event planning and mitigating hazing behaviours.

The review found that ANU residence’s emphasis on ensuring that there was a broad range of alcoholic and non-alcoholic events in the social calendar improved inclusivity and reduced peer pressure to consume alcohol. In general, residents at all colleges felt that events were run well, water and hot food was always available, and surveys reported that student leaders have good control over events.

In regards to hazing, keeping events that are tied to traditions is viewed as important to maintaining college culture. However, as some of these events were found to involve hazing behaviours, many have since been cancelled or adapted. Traditions that involve drinking are still somewhat associated with hazing, but there is generally an option to opt-in to them. Overall, the review found that college residents have a negative view of hazing, and all residences have taken a proactive approach to reducing the potential for hazing.

A University-wide NOUS report card along with each hall’s review will be released in the coming days.

Genevieve Garner is a former resident of Bruce Hall.

Grace Sixsmith is a current resident at Lena Karmel Lodge and a former resident of Bruce Hall.

Ronan Skyring is a current resident at Burton and Garran Hall.

Elena Couper is a former resident of Burton and Garran Hall.

Nick Richardson is a former resident of Fenner Hall.