Lights On, No One Home: Bruce Hall After SA5 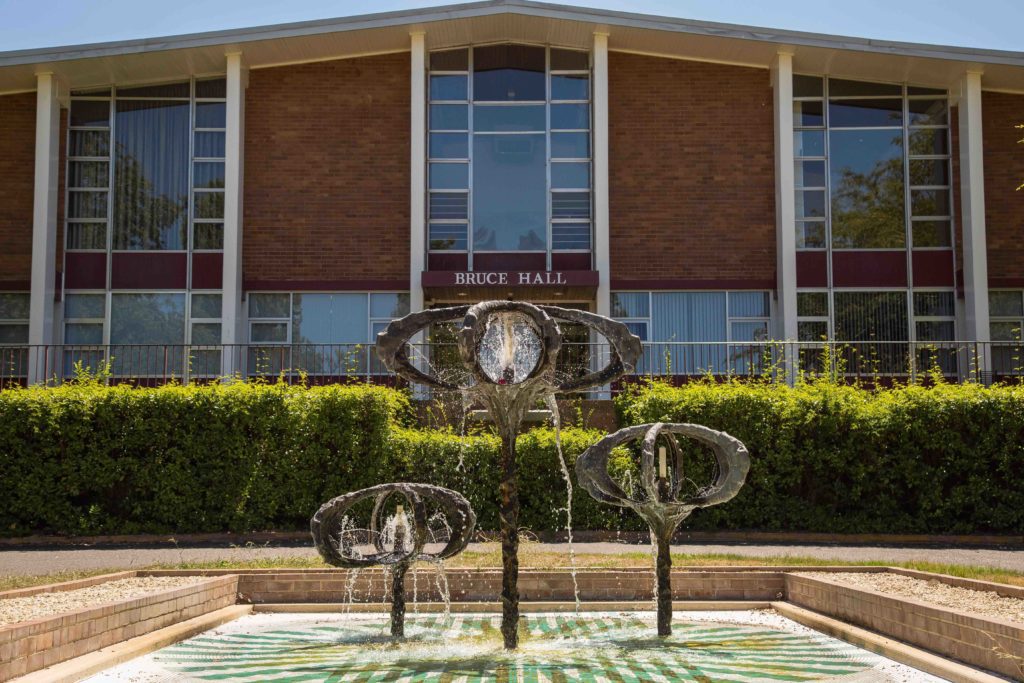 At Bruce Hall, the lights are on and no one is home.

The Flugelman fountain is still dribbling away as weeds do their best to reclaim the edges, while temporary fencing surrounds the former residential wings of Australia’s first co-educational college in preparation for its demolition.

Inside, a textbook for STAT1008 with its spine cracked has been abandoned in the corridor, along with an iron and a pair of gumboots. There are odd sheets of paper, posters still on the notice boards and the detritus of student life: a fork here, a box of tennis balls there, memes still blu-tacked to the windows. Name tags are still on the locked doors of rooms.

In the quads, the grass has gone to seed and dried off, while white bed frames have been dismantled and stacked outside.

When Woroni visited at the end of O-Week, the former home of Bruce Hall was in a state of suspended animation – as if everyone had simply upped and walked out.

The President of the Bruce Hall Common Room Committee, Matthew Bowes, said that the new building has presented ‘immediate questions’ of how Bruce Hall would be run in a different space and students had settled in well.

‘We have had more returners than normal this year, which has been overwhelmingly positive,’ he said, speaking to Woroni after a long O-Week.

SA5 will only be Bruce Hall’s temporary home. ‘There was no chance to look at the new space before the start of the year, so we have had to adapt quickly to continue with how Bruce Hall is run,’ Mr Bowes said.

‘Some small things can’t easily transition. The old building had a large dining hall, whereas here we can’t easily run events over dinner,’ he said, noting that the new space had lent itself to creative thinking about how Bruce Hall’s culture could be maintained.

Mr Bowes said that the Bruce Hall Common Room Committee had been given assurances from the ANU that they would be included in consultations regarding the design of the new Bruce Hall, set for completion by 2019.

‘We’re particularly interested in the individual cost of things, like air-conditioning or hot water in every room. We want to know whether it’s worth it, and present the case to students in terms of the effect on room cost,’ he said.

The new complex on the Bruce Hall site is set to house 800 students and fund an expansion of the Tuckwell scholarship program. Money for the new complex is being drawn from $100 million donated last year by Graham and Louise Tuckwell.

This followed a $50 million donation in 2013 to establish the eponymous scholarship.

One first-year Bruce Hall resident told Woroni that he felt ‘right at home’ in SA5, along with around 300 first years.

‘The senior residents were concerned that, because we aren’t in the same physical building, the Bruce Hall culture wouldn’t continue.

‘But I think they worked harder this year, and put extra effort in, to make sure there were plenty of events and that we all felt welcomed.’

A longer O-Week period, starting on the 8th, was a ‘masterstroke’, he said, as it allowed for Bruce Hall residents to get to know each other before the wider university campus.

‘Everyone has been saying that we were out of our rooms by 9am and not back there until 1am – because we were too busy socialising!’

But the move and redevelopment of the Bruce Hall site has faced harsh criticism. Former Bruce Hall residents and staff have been calling for the protection of the original buildings, built in 1961.

Last November, the ACT Heritage Council decided not to add the buildings to its register, paving the way for its demolition. However, the ANU has previously signalled Bruce Hall’s heritage value – a view supported by the National Trust.

The National Capital Authority (NCA) approved the demolition plans for the residential wings in February, despite 127 of 129 submissions received in the consultation period opposing the work.

The public consultation period on the application to demolish the Bruce Dining Hall closed on 6 February, with the NCA yet to make a decision regarding this application.

The ANU still expects construction of the new student residences at Bruce Hall will begin in the second half of 2017.

Bruce Hall Common Room Committee President Matthew Bowes said that some older residents may be interested in a farewell to Bruce Hall event before it is demolished, but that they needed to strike a balance with the past and the future.

‘Our alumni are a crucial part of the Bruce Hall community – and we want to care for that, but at the same time we don’t want to dwell,’ he said.