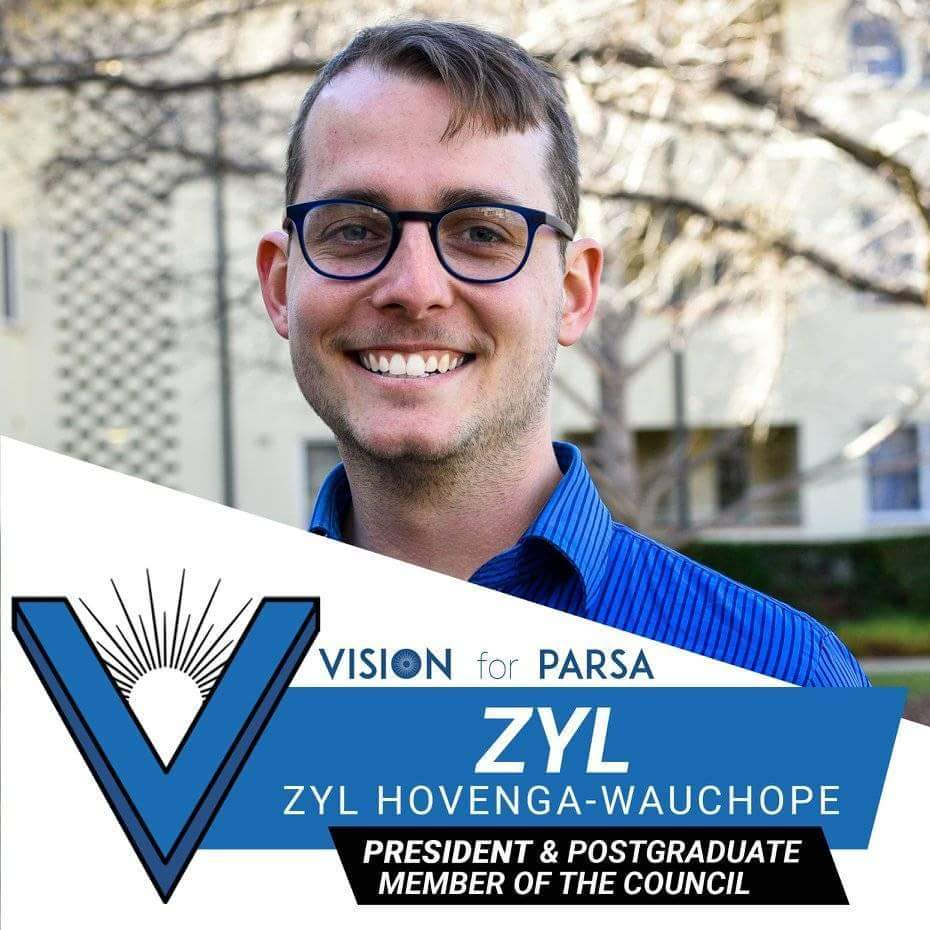 Woroni caught up with Zyl in light of his win.

1. How was your experience of the election campaign period?

It’s pretty nice that it’s over. It’s a good opportunity to take a break from work. It was a stressful and emotionally tense period in my life. It is good to get back into what’s going on and take some time to breathe and focus on what’s coming next.

2. Vision’s policy platform has several listed initiatives under different categories. Is there a particular category that you would give priority to or anything that you want to start working on immediately?

There are issues that affect a lot of people a little bit and a lot to a fair amount of people. Working to solve the postgraduate student accommodation problem is a priority. There are things that we can do tomorrow and there are things that’ll take time. They may even take a year and not get done. When we start working, the priority for me is sitting with the team and working through the timeline for what should be done next. We want to work immediately on induction for international students as we want to get that done in time for Semester 1. As opposed to this, working on the social media process is something that’ll take time. The first step is working with the team, working out timelines and making sure everyone is strong and empowered.

3. You have lead PARSA’s ‘Home Away From Home’ campaign. What do you think about the postgraduate student accommodation guarantee that was announced recently?

It is a great step. A fairly sizeable minority of people are affected by the problem.  Accommodation is a problem that has systemic issues that cannot be solved in a week. PARSA has already spent a year advocating for the issue. PARSA will, and I, will be advocating for this for the continuing time. It is a really critical issue but we also have to be realistic about what can be achieved about it and be judicious with our time and resources.

4. A noticeably small percentage of the postgraduate student population has voted in the general election this year. What, according to you, are the reasons for low participation in the voting process?

The position which attracted the most votes this year was the president with just under 900 votes which comes out to about 7% of the population. I think this speaks about a few issues with engagement. One is around the value that students see from PARSA. And another one is around, I think, a general current of disaffection with student politics. For many people, PARSA is something that doesn’t interact with their lives and even when it does, it doesn’t do in a way that matters to them. The other larger issue is that postgraduate students have busy lives. Heaps of them work part-time, or don’t live on campus or have full time jobs with children. So they’re very busy people. So while there are about 12,500 postgraduate students at ANU… they don’t have the time to involved. That’s not an excuse. That’s just grappling with reality.

The key to this issue is that PARSA as an organisation can be more accessible, communicate with members and be more relevant for members. That’s not going to be solved tomorrow. The other thing I would say, more generally, is to improve the marketing strategy for engaging with elections – which is to review the way that elections are promoted and presented to members.

5. What are your plans for PARSA’s future as an organisation? Do you plan on changing the strategic plan created for the period of 2018-2021?

The focus for the coming year will be on the stabilisation and implementation of radical reforms and initiatives that we’ve successfully launched. The strategic plan is a policy document. So that’ll be the same but it’ll still be reviewed. I’m going to be working closely on it.

The 2018 PARSA election was closely contested election for some positions, with small differences in the number of votes received for the opposing candidates.

The list of officers elected from ‘Vision’ is as follows:

Milena Soares as College of Asia & the Pacific Officer (Coursework)

The list of officers elected from ‘Empower’ is as follows:

The officers who were elected unopposed from ‘Vision’ are as as follows:

The officers who were elected unopposed from ‘Empower’ are as as follows:

Five independent candidates were elected to the board of directors. Three casual vacancies remain for the board. The elected members of the board are as follows:

No nominations were received for the position for of Aboriginal and Torres Strait Islander Officer and this position remains a casual vacancy.

The ticket is running candidates for all executive positions. The ticket is politically unaligned and based on the principles of community and care.