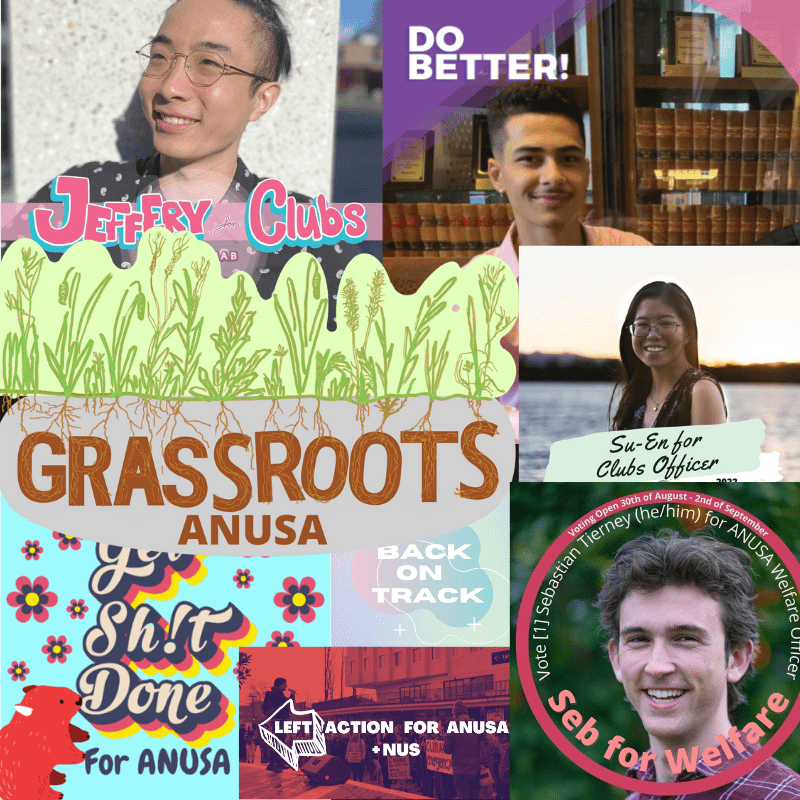 ANUSA Election polls open today at 9am. Nearly every position is contested, including all executive positions. Here’s a run-down of all the candidates.

Rounding out the executive races are the four candidates battling for Clubs Officer: Phoenix O’Neill (Grassroots), Elijah Smith (Get Sh!t Done), Su-En Hia (Independent), and Jeffery Yang (Have a Jab with Jeffery).

Two Grassroots candidates – Isha Singhal and Rania Teguh – are running for CBE representative against Blake Iafeta (Do Better! with Blake Iafeta). Meanwhile, Katie Byrnes and Neha Kalele of Grassroots face Adam Busselman (Back on Track) in the race for two CoL representatives.

Amongst Department Officer roles, three have been filled unopposed, independents Vincent Lee as Queer* Officer, Thomas O’Donnell as Disabilities Officer, and Elise Chua (Grassroots) as Environment Officer. The remaining positions are not contested at this stage.

The General Representative race is packed, with twenty-nine candidates fighting for just fourteen positions. This includes candidates from Grassroots, Get Sh!t Done, Get Going, Back on Track, Left Action, independent Michael Matheson-Deng, and Blake Iafeta (Do Better! with Blake Iafeta).

Polls open at 9am on Monday the 30th of August and will close at 12pm on Thursday the 2nd of September. Results are expected after polls close.

Due to controversial funding cuts, the University of Technology Sydney’s (UTS) student publication Vertigo has this week been left with only half of their expected funding for this academic year.