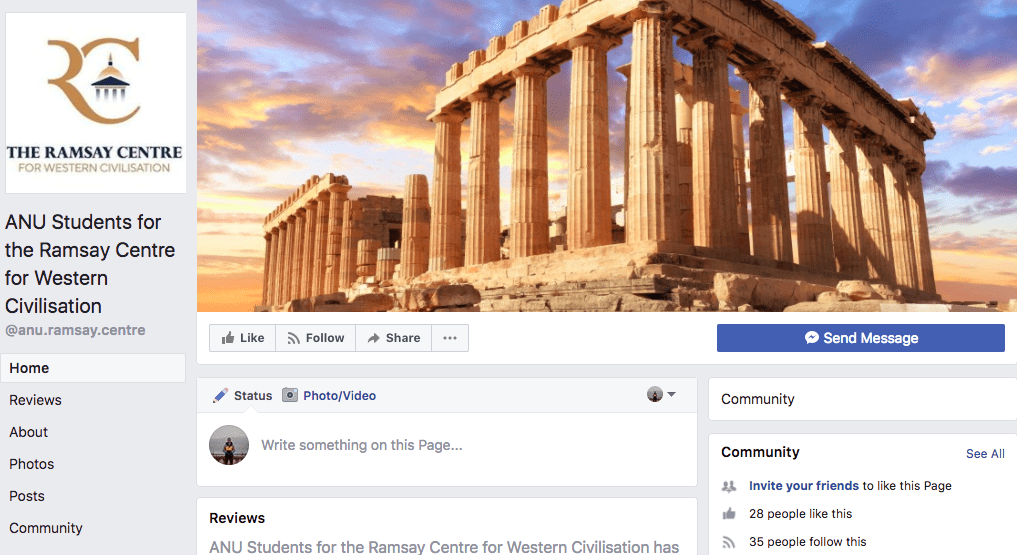 A new, pro-Ramsay Centre Facebook page has been created by a student who has shared articles about “superfascism” and the belief that women have “no soul”.

The page’s posts have been limited to links to the Ramsay Centre’s various sections on its website, as well as articles relating to the Centre from conservative media publications.

ANU and the Ramsay Centre are currently in negotiations regarding a potential degree program, with corresponding scholarship opportunities, which would be funded entirely by the Ramsay Centre. Such a partnership would see the hiring of 12 extra staff to facilitate a new degree focusing on western civilisation. This degree would feature 16 courses, 12 of which would be compulsory courses relating directly to the new degree, and see a cohort of 60 students; half of whom would receive full scholarships.

Executive officer of the Ramsay Centre Emma-Kate Bos said in a comment to Woroni that the Ramsay Centre is “100% in agreement” with ANU’s emphasis on the need to employ “smart and critical academics” to teach and present a comprehensive and critical analysis of Western Civilisation. In addition to this, CEO Simon Haines told the Sydney Morning Herald that universities “will retain their independence” in the rollout of the program.

Speaking to Woroni, ANU Students for Ramsay Centre founder McHugh said that he “and a number of other students […] felt that there was no student group speaking in favour of the ANU-Ramsay Centre collaboration on a new degree for Western Civilization.”

While some students have reacted to the Bachelor of Western Civilization degree with hostility, others have voiced support in online discussions and in-person forums.

A vocal critic of the current CASS/humanities syllabus, McHugh has stated that “the quality of higher education in Australia is abysmal.”

“It seems to me the Australian higher education system has become addicted to easy money from international students.”

The page has been promoted by a number of ANU students on ANU-related Facebook groups and pages. One Facebook group where the pro-Ramsay Centre page received popular reception was the ANU School of Traditionalism.

This group, also run by McHugh, includes links to and discussions about fascist and anti-Semitic publications, including articles advocating the thoughts of Julius Evola, a  self-described “superfascist” Italian philosopher who also worked in the intelligence wing of the SS during World War 2.

One post linked to an article about Evola’s views on women, which included the belief that women have “no soul, or being.”

“Because humanities departments are dominated by this extreme left ideology, universities are failing to adequately educate students in their own culture, history and values,” McHugh said when asked to explain the ideological basis for ANU Students for Ramsay Centre.

Questioned on whether his new Facebook page shared any motives with the ‘ANU School of Traditionalism’, McHugh replied that both share “a desire to affirm rather than critique […] the culture, history and values of Western Civilisation.”

The ‘ANU School of Traditionalism’ describes itself as “Anti-progressive. Entirely reactionary” in an apparent reference to comments made about McHugh by a Young Liberal member following the collapse of their short-lived political alliance prior to the AGM of the ANU Men’s Network.

‘ANU Students for the Ramsay Centre for Western Civilisation’ currently has 29 likes.

An opposing Facebook page, ‘Keep Ramsay Out Of ANU‘, has 128 likes.