9.2.2015 by Waheed Jayhoon and Karan Dhamija
ANU Student Media (Woroni) is a party to the SSAF funding agreement. Karan Dhamija was an elected representative on ANUSA in 2014. 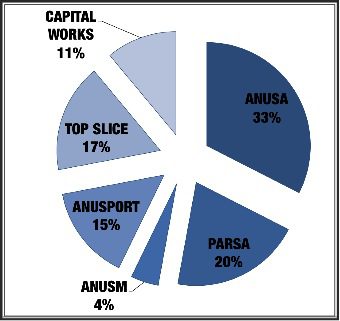 The Australian National University has moved to terminate existing funding agreements with several of the university’s student organisations that have been in operation since 2012.  Although each of the agreements were due to expire in May, the ANU has elected to terminate the agreements early and avoid having two sets of regulations governing the 2015 transfer of the Student Services and Amenities Fee (SSAF) funds.

The redrafted agreements are planned to come into effect on 9 February 2015.

The early termination of the agreement followed a review conducted into the financial governance of the organisations by the auditing firm Ernst & Young.

To ensure that recipients appropriately used their SSAF allocations, separate funding agreements were made with each of the student bodies in 2012. These agreements mainly outlined parameters on fund usage, payment deadlines, and requirements for financial reporting.

The drafting of new agreements is thought to have come about as a result of the student organisations’ incomplete and inadequate financial governance procedures. As a result, the university withheld some of the SSAF funding for student organisations and prompted the Ernst & Young review. The new arrangements is intended to reflect the findings of the review by imposing more stringent reporting requirements upon the recipients of SSAF.

The extent to which these amendments will shape the new agreement is still unclear. It is however expected to better reflect common reporting cycles.

ANUSA President Ben Gill declined to comment as to whether ANUSA would be willing to incorporate integration of financial governance with the University; an idea that has been floated in the past. Past ANUSA representatives have shown concern for the possible impact of financial integration on ANUSA’s autonomy.

SSAF, which was first introduced nationally in 2012, allows universities to charge students a set fee ($143 at ANU in 2015) each semester to provide for a range of non-academic services and amenities. At the ANU these funds are primarily allocated to the student organisations, although ANU departments such as Facilities and Services have also bid for funds in the past.  Last year, an estimated $4 million raised through SSAF was allocated under a bidding program. Organisations also share ‘Top Slice’ funds used by organisations for common purposes.

ANUSA President Gill added that “overall ANUSA agreed (with the review), with some recommendations receiving only partial support requiring adaptation or implementation”.

A little more than $4.5 million will be distributed in 2015 with ANUSA and PARSA receiving the largest shares. SSAF funds generate almost all of the funds used by ANUSA.