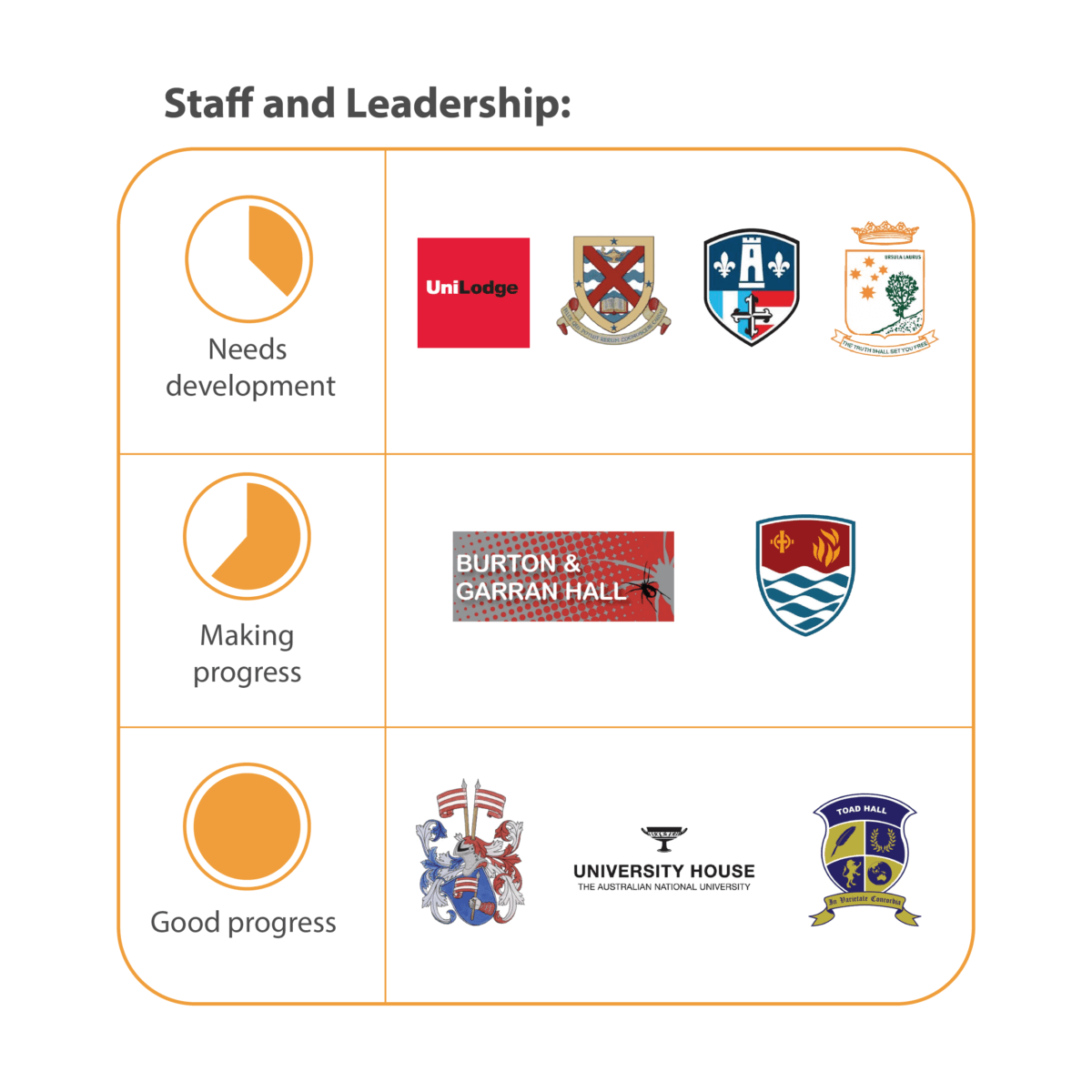 Completed at the end of 2018, the NOUS review aimed to investigate the factors which contribute to sexual assault and sexual harassment (SASH) at the ANU’s student residences.

This article will illustrate how the NOUS review ranked each residence in relation to community atmosphere and the quality of staff leadership and institutional support.

In the category of ‘Community Atmosphere,’ the report classified Bruce Hall as “making progress.” The review commented that “Bruce Hall is an inclusive and safe community with a solid base for further community strengthening.” The review outlined that 88 per cent of residents perceived the culture at Bruce Hall as “positive, supportive and inclusive” or “quite friendly.”

When asked about what factors made residents feel vulnerable/unsafe 13 per cent of residents highlighted social groups which intentionally or unintentionally exclude people, double the ANU average of six per cent.

The recommendations included addressing the barriers between domestic and international residents as well as social groups and activities that increase risky, anti-social or exclusionary behaviour.

The review mentions that neither the Head of Hall nor the Deputy Head of Hall lives on campus, contributing to a perceived lack of visibility, thus, limiting accessibility to pastoral care. As a result, the review recommended that stronger strategies be put in place to assist Senior Residents (SRs) and CCs to manage the duties and their studies.

In the worst cases, residents complained that staff have a “passive or inactive approach to responding to complaints of inappropriate behaviour.”

When asked to describe the culture at the hall, 87 per cent of residents described it positively.

The review highlighted Burgmann’s attempts to “establish [a] culture without socially exclusive behaviours such as cliques.” However, the review went on to comment that the college needed to work on adopting measures to be inclusive of residents from gender diverse and low socio-economic backgrounds.

The report highlighted the strong perceived presence of staff at college because both the Principal and Deputy Principal live on site. However, some residents said they didn’t go to college staff for assistance out of fear it may be “mishandled, ineffectively addressed, or not responded to at all.”

When asked to describe the culture at the residence, 83 per cent perceived the college positively, while 17 per cent rated it ‘only welcoming to people who fit in.’ The review found that 40 per cent found the hall ‘totally safe’ during the day, but only 20 per cent at night.

The review recommended that the hall empower student leaders to take meaningful action, as well as focus on the impact of alcohol and traditions,  have on the residential environment.

The review described that the staff, and particularly the Head and Deputy Head of Hall, have undergone extensive training in mental health, first aid and suicide awareness, and have significant professional experience.

It finished by commenting that while there have been attempts by the staff to change the hall’s culture, many residents are still afraid or unwilling to actively reach out for assistance.

The review commented that residents have a somewhat mixed view of the culture and community atmosphere at Davey. This is partly because, as some residents reported, “UniLodge staff treat them more like ‘customers’ than members of a community.”

The review states that while 58 per cent of residents feel ‘totally safe’ during the day, the figure drops to just 33 per cent at night. It goes on to reveal that in times of discomfort or vulnerability a majority of residents turn to friends or family, with only four per cent turning to staff.

The review commented that “staff responsibilities across UniLodges impact pastoral care, visibility and engagement efforts.” Similarly, as a result of their small size, efforts to create connections between staff and student leaders are impeded.

It was concluded that student leaders are too heavily relied upon to deliver security services and pastoral care, and as such staff need to be made more visible and accessible.

67 per cent of residents said that they ‘totally agree’ that they would ask for help if something were to happen to them or to one of their friends, which is 15 per cent higher than the ANU average.

The review recommended that Fenner Hall continue to build an inclusive environment and invest in the ongoing development of shared expectations about sexual assault and sexual harassment.

Residents at Fenner are the most likely to communicate with staff, with 12 per cent reporting that they go to staff when they are feeling vulnerable.

Residents indicated general satisfaction with all aspects of support around sexual harassment and assault, and the only improvements needed are in implementing more effective prevention tactics. 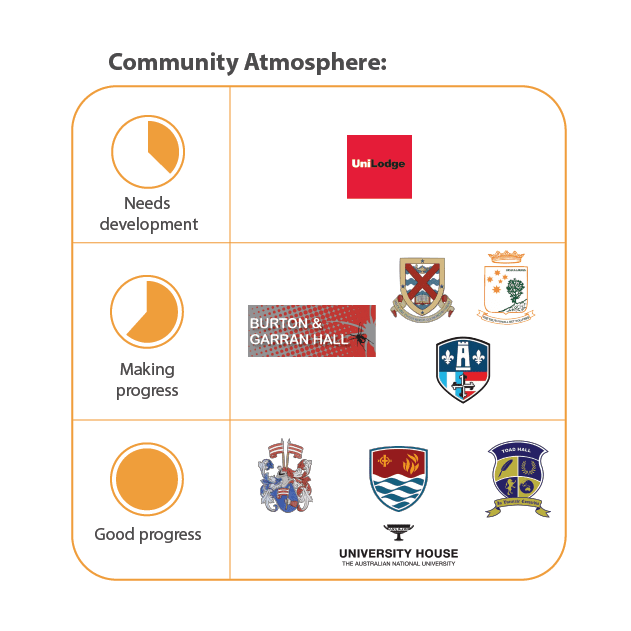 The review highlighted its recently improved atmosphere, which the review attributes to its greater diversity in its intake of residents, as well as changes to student leadership.

The review recommended that Johns address legacy issues by continuing to focus on reducing the negative impact of alcohol, as well as embedding more inclusive traditions.

The review commented that to build confidence, there is a need to seek student feedback on issues.

More specifically, the review highlighted that while there is extensive training among staff in dealing with a matter of sexual assault and harassment, residents do not feel comfortable accessing it. This is partly because some felt uncomfortable with the nature of the language used by staff.

The review revealed that while 80 per cent of residents feel ‘totally safe’ in the lodge during the day, that number drops the just 50 per cent at night.

It finishes by recommending that student leaders be empowered to extend cultural change initiatives, especially regarding substance misuse, as well as develop shared behavioural expectations to different cultural backgrounds.

Feedback for Staff Leadership and Support is similar for all Lodges, as such see Davey lodge.

With only 23 per cent of residents describing the culture as ‘positive, supportive and inclusive’, Lena Karmel falls below not just the ANU average of 51 per cent, but also the Unilodge average of 29 per cent.

When asked how safe residents felt within their residences, ‘totally safe’ dropped from 40 per cent during the day to just 27 per cent at night.

As such, the report gave similar recommendations as that of Davey and Kinloch:to empower cultural change initiatives and to develop behavioural expectations.

Feedback for Staff Leadership and Support was similar for all Lodges, as such see Davey lodge.

When asked what made them feel unsafe/vulnerable, 14 per cent of residents mentioned ‘social groups which intentionally or unintentionally exclude people,’ which is more than double the ANU average.

The report recommended that more could be done to encourage Ursula Hall residents to seek support, as well as articulating a strong stance against exclusionary behaviour.

The report elaborated that “resourcing constraints impact the ability of staff to deliver pastoral care.” This was because not only do no staff live on campus, but they also received little to no training on how to effectively provide pastoral care.

64 per cent of Warrumbul residents perceived the lodge’s culture as positive, supportive and inclusive, which is “significantly lower than the ANU-wide average.”

Feedback for Staff Leadership and Support was the same for all Lodges, as such see Davey lodge.

Allegations of sexual assault by a member of the Unilodge community have come out in the last few weeks. This has lead to questions about the handling of Sexual Assault and Sexual Harassment (SASH) allegations by residential halls.