The evening vigil was held at Nara Park, on the edge of Lake Burley Griffin, and was a time for reflection and mourning. The speakers came from across the Kiwi and Islamic communities in Canberra.

The event was attended by thousands of Canberrans from families to lone public servants and included Islamic and Christian prayer in English, Arabic and Te Reo Maori. Speeches were heard from Chief Minister Andrew Barr and New Zealand High Commissioner Dame Annette King.

“As we express our sorrow we must also express our abhorrence.” Andrew Barr said “there is no place in our society for these views”.

Speaking at the Nara Peace Park took place before a stone plinth, which held the ‘peace bell’. The ‘peace bell’ was rung fifty times as the sun set – once for each person who lost their lives. Organisers had also presented fifty prayer mats, with a candle placed on each mat.

Speakers included ANU PhD candidate Shamim Homayun, who spoke poignantly of his friendship with Haji Daoud. Daoud lost his life at the Mosque on Friday, after allegedly greeting the shooter with “hello friend”.

Reflecting on his friend, who inspired his PhD research into Afghanistan, he said “although his life was ordinary, the values he lived by was extraordinary.” Daoud would pick new refugees up from the airport as they arrived in Christchurch, and played a mentor role in Homayun and others lives.

Homayun said, “as more names come out, it is likely I know more of them.”

American-Muslim advocate Brice Hamack touched on the role of Islamophobia in the violence that occurred. “Muslims have been saying, screaming for years, that we are being unfairly targeted.”

Hamack also said the atrocity had finally allowed the western world to humanize Muslim communities. “Only heartwork: empathy and compassion,” would lead to a change in norms. 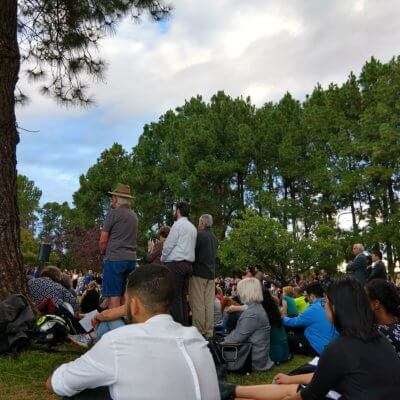 As the sun came down, golden light streaming through the trees, the Al-Fatiha was recited. It was recited first in Arabic, and then in English, to allow the whole congregation to understand its message. The prayer is ‘the opener’ and is recited in full every prayer cycle. It was likely one of the last prayers heard by those in the Al Noor Mosque in Christchurch on Friday.

Chief Minister Andrew Barr was also in attendance, representing the ACT Government. He said his thoughts were with the Islamic and New Zealand community in Canberra. “As we express our sorrow we must also express our abhorrence.” He said, “there is no place in our society for these views”.

He took time to speak on the values of the Canberra community, in order to outline the safety Islamic communities should feel in Canberra. “We pride ourselves on being a diverse, inclusive community.”

These sentiments were echoed by Dame Annette King, who recently took over the role of NZ High Commissioner in Canberra. “We represent diversity, kindness, compassion, a home for all those who share our values, for all those who need a home.” She said, “among that diversity we share common values of commission and support.”

The NZ High Commissioner said “the 15th of March will be seared into our memory”.

Before concluding the vigil, the congregation was called to recite ‘the Christchurch response,’ which calls for compassion and action against Islamophobia. 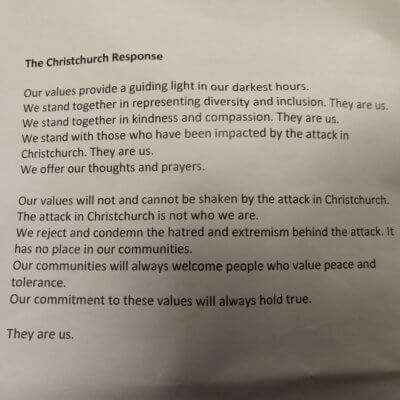 A rally against Islamophobia, held by the Refugee Action Committee, took place simultaneously on Tuesday evening.

"To the guests in attendance, he told them to speak out against islamophobic sentiment in society, and not to remain a silent bystander. His message was a powerful reminder of the role of the individual in speaking out against injustice."