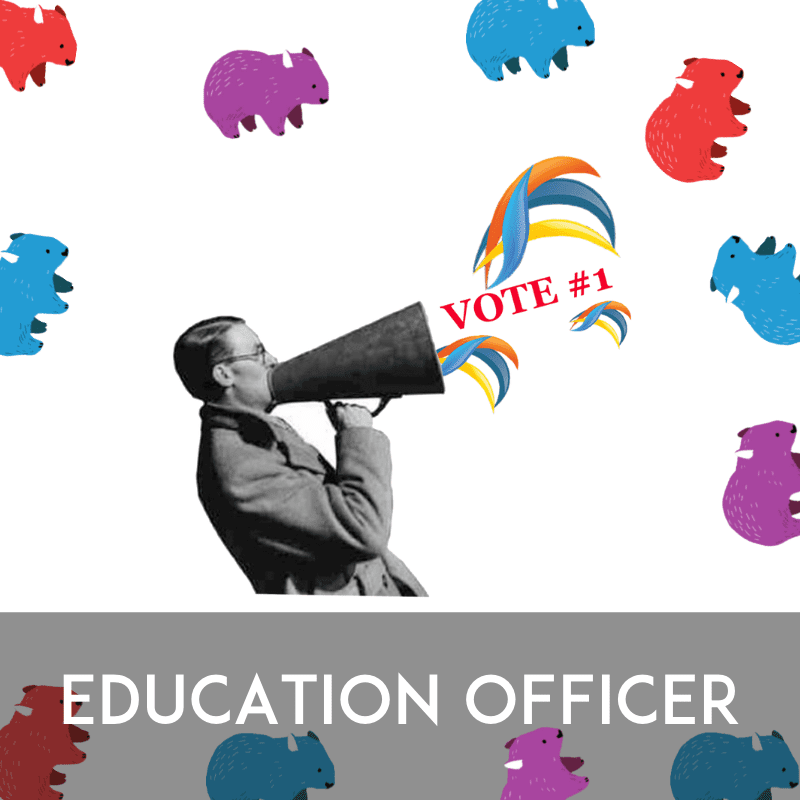 On the policies they hope to implement

Tucker hopes to upskill students so that “they can feel confident in their activism”. They will “produce a protesting handbook”, stating that “these skills and resources will create longevity in ANUSA’s activism”. They hope to “mobilise students to stand up against course cuts, against wage theft on campus, and against staff cuts”. They further hope that the establishment of the ANUSA Night Cafe “sets the standard for student workplaces on campus, ensuring a living wage and worker democracy”. They stated that ‘Grassroots ANUSA’ “wants to build up welfare support, engagement and social events”, to create a healthy community. They will be “leading the campaign for more SSAF funding in the ANU bid”, and will offer their “practical campaign skills to support ANUSA departments in organising rally’s or actions”.

Iafeta of Do Better! with Blake Iafeta will make a concerted effort to expand mental health services and financial support for all ANU students, not just in the wake of the financial and psychological effects of the pandemic but also as a long term solution to improve student wellbeing at the ANU. They also stressed the need to coordinate with the International Students’ Officer to “support our international students, as many are struggling financially and mentally.” Iafeta also proposed removing participation marks for all courses and creating more flexibility for recipients of scholarships wishing to commence studies in the second semester, since most only allow for a first semester start.

Carter of Left Action hopes to not only fight against course job cuts but will seek to redefine ANUSA, and the ANU more broadly, as being against “militarism and imperialism in all its forms.” They state that “the only effective way to oppose cuts is to oppose university management”. They believe that “student unions have the capacity to be a powerful voice on the side of public health instead of the profit-driven death cult of the Liberals”, calling to “prioritise a campaign to call for purpose-built quarantine, to allow refugees and international students back, and against unsuitable quarantining in university accommodation and hotels”. They stated that they are “fighting for ANUSA to declare its support for the elimination of COVID, not the preservation of profit at the cost of ordinary people’s lives”. Carter will seek to remove all ties with the Australian Defence Force and BAE Systems, a company purportedly supportive of “Israeli apartheid.” Carter will also use the position of Education Officer to advocate for specific humanitarian issues such as encouraging the Australian Government to accept more Afghan refugees and to adopt a pro-Palestine position. They also seek to advocate for climate action and will use the platform to organise student climate demonstrations and protests.

Skelton of Get Sh!t Done for ANUSA will fight to “see the next government reverse the disastrous fee hikes that came in with the Job Ready Graduate Program, furthering the Change the Age of Independence campaign facilitated through the NUS Welfare department this year, a Bring Back International students Campaign, an upskilling activism camp to lay the groundwork for activism at ANU in years to come, the creation of an understand-your-rights handbook, the implementation of an in-person and google calendar activism notice board, a reinvigoration of “Get Enrolled, Get Informed, Get Voting”, and continuing to ensure and enshrine an intersectional response to activism”.

On how they will continue to advocate against course cuts?

Tucker said that they will work with the college representatives to seek out students and “empower working groups within the struggling pockets of the university”. They hope to “mobilise power from below, at … the grassroots level”, to spark change. They will bring their experience in activism and campaigning, and state that “together we will design nuanced and strong campaigns aimed at the appropriate pressure points, in order to save our courses and hold ANU accountable”.

Iafeta said that they will “support students in advocating against course cuts by engaging in activism and campaigning to fight the course cuts”, stating that “it is extremely sad that so many courses have been cut”.

Carter says that the “fight against course cuts” is their “highest priority”. Their experience in the Education Activism Network has seen her “leading the charge against course and job cuts over the past two years, including the save the libraries campaign and most recently the health clinic anti-outsourcing campaign”. Conceding that ANUSA office bearers do not hold power in the University Administration, they stated that successful campaigns “need to be as big as possible”, as “mass rallies, demonstrations, walk-outs and speak-outs are where we hold our power as students”.

Skelton will support students through a multi-faceted approach, attacking the issue on multiple fronts including “fighting from the ANU committee positions the ANUSA holds, petitioning and protesting”. She recognises the burden that may be imposed on students, and will “implement an Accessible Activism policy”. She will further “commit to upskilling both [her] Education Committee and ordinary members of ANUSA through an intensive upskilling camp, and through making [her] activism and [her] duties as transparent as possible”.

How will you balance your role with that of maintaining support from the ANU?

Tucker affirmed that they will “stand up to the Vice-Chancellor and the upper admin’s poor money choices”, stating that they “will put the pressure on”. They said “if during COVID-19 they can afford to revamp Julie Bishop’s offices for ~$800K or spend $17m on a bus stop, they can afford to not fire staff”. The candidate said that should the ANU “choose not to improve … then students will be skilled enough from the trainings [they] organise, to take effective action together, ensuring that ANU admin do their job.” Tucker highlighted the crux of the dilemma, that the ANU admin and the Education Officer “both want [the] ANU to be a good university, but for completely different reasons”, stating that “if ANU admin takes real note of student’s needs, only then can we work together”.

Iafeta stated that they “aim to maintain support from [the] ANU by making it known that what [they] fight for is what the students want and is not a result of [their] own agenda”.

Carter said that the “role of a union is to fight the bosses, not gain their support”. They argued that the “interests of the ANU are to preserve its bottom line”, and that “everything it does is in service of keeping the premium university price tag on a shoestring course budget”. They stated that “students need well-funded courses, staff that are better paid and better available to us, and a wide range of courses to study if we choose”. Carter said that “the extreme passivity and compliance of ANUSA over the last year of course cuts has done nothing to preserve the quality of our education”, which is why “we need a Marxist in ANUSA”.

Skelton said that it is “the implicit role of the Education Officer to be the activist body within the university and to facilitate fights the university might not want to be brought to its front door”. She states that she “will not compromise [her] duty to students to ‘maintain support’ from university executives”. However, she also believes that “it is [her] duty to work with other activists within the university, such as the NTEU, and other student service bodies such as the RRU and Access and Inclusion, to ensure the safest, most accessible and most intersectional responses to university issues”. Skelton said that it “is not a balance between my role and support from the ANU – this is the implicit nature of the role of Education Officer”.