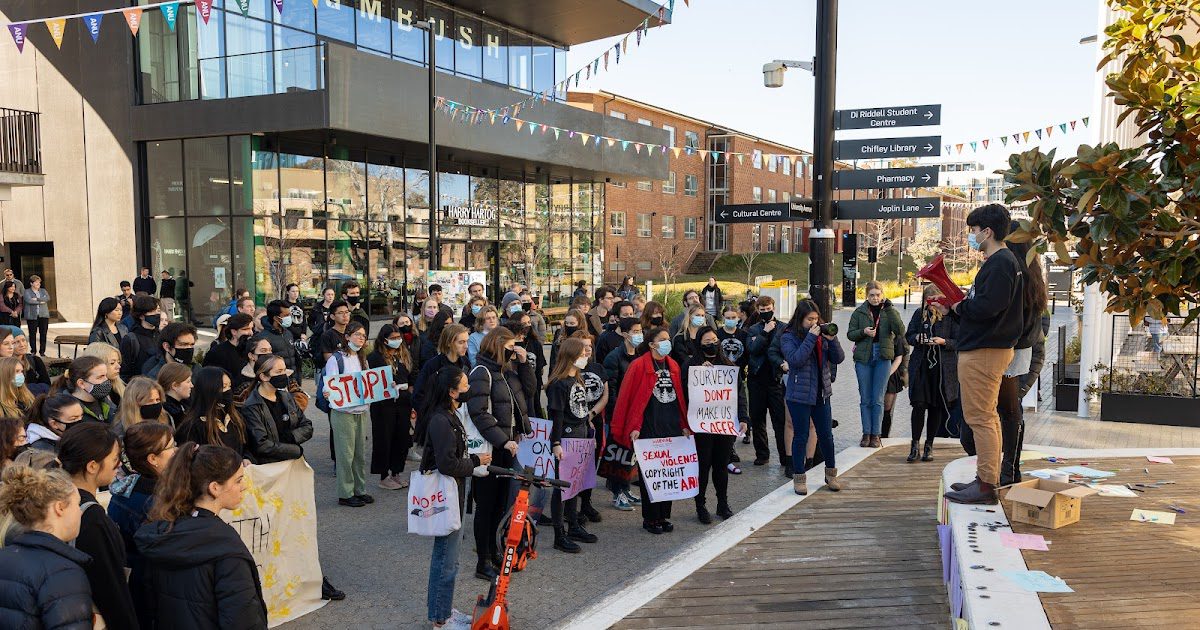 On the 2nd of August 2021, the ANU Women’s Department, in collaboration with ANUSA and PARSA, staged a walk-out of the ANU’s 75th year anniversary celebrations in protest against the University’s failure to act upon the findings of the 2017 National Report on Sexual Assault and Sexual Harassment (SASH) at Australian universities.

The protest began on Kambri lawns prior to the ANU’s anniversary celebrations, and commenced with sign making and flag laying. Attendees spelt the phrase ‘4 years of broken promises’ on the grass with small black flags. The phrase refers to the recent report commissioned by ANUSA, highlighting the lack of action on the part of the University to address SASH concerns on-campus.

Approximately 25 students proceeded into the Manning Clarke Hall of the Kambri precinct at 11am, where the anniversary celebration was held. These students, dressed in black and holding large posters, staged a walkout from the celebrations in protest.

Speeches began with current ANUSA Women’s Officer Avan Daruwalla, who spoke on the ‘Broken Promises’ report and the demands of these protests. She highlighted the work of those preceding her and applauded the protestors who were “forced into a position of advocacy in order to protect themselves and each other”. She said, “the responsibility to keep students safe lies with the University and when they fail to protect that duty of care, everyone suffers”.

Next to speak was former (2020) ANUSA Women’s Officer, Jin Law, whose comments centred on the failure of the University to take meaningful action. In particular, she highlighted her frustration at the University’s focus on saving its reputation, rather than assisting survivors. “I am angry. This is my fourth protest, I have been here for five years and nothing has changed. I am so tired”.

This concern was echoed by ANUSA President, Madhumitha Janagaraja, who highlighted the impact that the lack of action has had, and continues to have, on survivors. “As a survivor you see your protests ignored, your experiences diminished and the onus put on you and nothing changes”. She concluded her remarks by thanking the protestors for their support whilst calling on the ANU to take action.

2021 PARSA President, Eve Walker, delivered a personal speech, sharing her own experience of sexual assault. Ms Walker thanked the attendees for their “willingness to listen” and called on the ANU to “do more to support survivors.” PARSA’s Queer* Officer, Arushi Ganguly, spoke next, and noted how, for many students, they “deserve to feel safe at our home.” Ganguly also said the University had “betrayed the trust of students.”

Last to speak was Vincent Lee, the ANUSA Queer* Officer. Their remarks focused on the inaccessibility of crisis support services, highlighting the fact that they had to travel for 40 minutes on a bus to Belconnen, just to receive the assistance they needed, because it wasn’t available on campus.

In interviews with Woroni reporters present on-the-scene, many protestors expressed their frustration at the lack of action by the University to properly address these issues. “The recommendations are there,” said one student, stating “they just need to actually implement them”. Others expressed their concern regarding the insensitivity of the anniversary celebrations coinciding with the anniversary of the 2017 National Report.

The ANU states that ‘accusations of inaction are unfounded and that they are making efforts to improve the situation’. In response, many students highlighted the ongoing issues with the Respectful Relationship Unit (RRU) – which is currently not fully staffed. 2021 PARSA President, Eve Walker, also commented on the RRU’s extremely high turnover rate, stating that many new employees are unaware of the true scope of their roles.

Following the conclusion of the anniversary celebration in Manning Clark Hall, some ANU Staff were observed exiting from the building’s rear, likely to avoid confrontation with student protestors. To many students, this appeared to be a repeat of the 2019 protest, where University staff were celebrating the anniversary in University House chose to exit the building to avoid SASH protesters.

If you or someone you know has been affected by any content raised in this article, please contact one of the support services below:

*Editor’s note (03/08): An earlier version of this article failed to mention the speeches of Eve Walker and Arushi Ganguly. This article has since been amended to correct this. We apologise for this error.

Yesterday saw thousands protest across the country, from in-person marches and memorial services in Canberra and Sydney, to online events in Brisbane and Darwin.